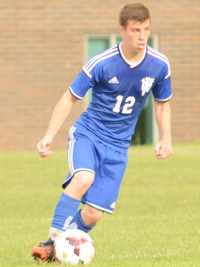 Junior Dan Malarik is on a bit of a scoring streak. OK, maybe that doesn’t adequately tell the story.

Malarik scored three goals in Independence’s 6-0 win over Lutheran West on Monday to give him 10 goals in his last three games and 14 on the year.

“He’s on fire,” said Independence coach Ryan MacRaild of Malarik, who tied a school record with five goals against Cornerstone Christian Academy on Saturday. “Out of the 29 goals we’ve scored in our last four games he has 13 of them and he assisted on at least three more. He just works his tail off. He’s the hardest working kid on the field.”

The win was the eighth straight for the Blue Devils, who have outscored their opponents, 46-6, during that span.

“We had a lot of unselfish play today,” MacRaild said. “Kevin Mewhinney is a goal scorer himself and he had three assists. He helped Danny Malarik get another hat trick.”

Independence’s offensive explosion during its eight-game win streak was created by that unselfish play.

Eight different players have scored goals during that stretch.

Malarik and Collins are two of the most dangerous players to possess the ball.

“Evan Collins, he’s our center midfielder. He distributes the ball and makes things happen,” MacRaild said. “Other teams keep an eye on him and that opens things up for other guys. It’s good to have a balanced scoring attack.”

Kunevicius, a freshman, has emerged as one of Independence’s scoring threats.

“He started off at forward but a couple of other guys stepped up and it’s hard to keep them off the field,” MacRaild said. “When he gets in he’s a dangerous player. He has four goals on the year now.”

With such a powerful offense, one might think Independence’s defense plays second fiddle, but that isn’t the case.

In front of Bernstein are Nolan Fields, Matt Mroczysnki, David Wisniewski and Brandon Stralka. They form a nearly impenetrable barrier in front of the goal.

“They make a heck of a defensive team and along with Joe they have had a good run,” MacRaild said.

Independence plays at Gilmour Academy on Thursday then will finish a game with Harvey on Saturday. That game was interrupted by lightning with the Blue Devils on top 1-0 with 27 seconds remaining in the first half.