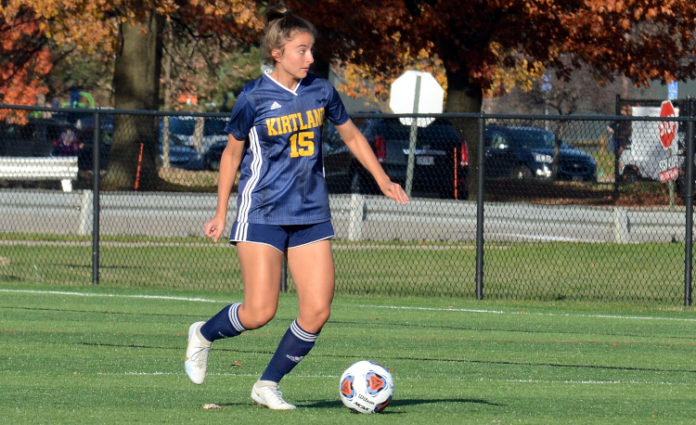 Less than a month ago, Kirtland senior Maria Bevanda and her Hornet teammates celebrated the school’s first soccer state championship.

On Thursday, Bevanda realized another dream when she announced her commitment to continue her playing career and education at Ursuline College in Pepper Pike.

“I am unbelievably excited to be able to compete at the next level, especially while continuing my education,” Bevanda said. “Athletic and academic balance has always been something that has kept me going.”

It’s that balance that helped Bevanda connect with Ursuline.

“What led me to Ursuline was the sense of welcoming and comfort I felt from the campus, coaches, staff, and overall environment,” she said. “I loved their soccer program and the strength of their academic programs. The academic support offered through athletics was something that drew me to Ursuline.”

Bevanda is the second former Hornet to join the Arrows’ program as Lidia Rodin signed with the school after the 2019 season.

“Lidia has been a great helping hand throughout my entire college search process,” Bevanda said. “She shared everything with me in regards to Ursuline and college soccer in general. While she obviously advocated very highly of Ursuline, she always said that she wants to see me play college soccer, and if it’s with her, that’s even better. It’s very comforting and exciting knowing I’ll go into it with a familiar face. We’ve been playing together ever since we were kids, and I cannot wait for it to continue.”

As a junior, Bevanda scored three points on one goal and an assist as the Hornets finished 17-5 overall and advanced to the state semifinals. She was far more productive as a senior as she finished with 17 points on five goals and seven assists and played a key role in Kirtland’s 19-1-3 record.

She provided a calming influence and tactical skill in the midfield, which helped the Hornets to score a school-record 107 goals during the 2020 season.

“Maria has fulfilled a dream of hers to play soccer in college and I and the rest of the coaching staff are so excited for her,” said Kirtland coach Ed Bradac. “She achieved this goal through her hard work and dedication to the sport she loves. Her soccer knowledge and her work ethic set her apart, but what makes her truly special is she is an amazing teammate.”

Ursuline recruited Bevanda to play a similar role in college.

“As a center midfielder, my key components to be used would be to not only support but also be an overall playmaker,” she said. “Getting the ball out of pressure and creating new opportunities are always something to capitalize on.”

Bevanda, who plans to major in nursing on her way to becoming a Nurse Anesthetist, knows she’ll have to improve her game and conditioning to play at the next level.

That’s a challenge she’s ready for, especially after playing at such a high level for one of the premier girls’ high school soccer teams.

“As a collegiate athlete, knowing the level of competition will definitely rise, it motivates me to continue to get better each and every day,” she said. “I aspire to be the very best player I can be on my future team so we can be the most successful as a whole.”

As excited as she is to move on to Ursuline, Bevanda will always remember her time as a Hornet and she hopes her career path inspires her younger teammates and future Hornets the same way she was inspired by Lidia Rodin and Maya Zovko, among others.

“Although winning the state title is something I’ll forever be proud of and never forget, it’s the memories we made over the summer during workouts, before and after games, and at the backfields during practice, that will truly mean the most,” she said. “I hope the younger girls learn that hard work and dedication truly does pay off. Great things come but you have to stick through the good and the bad. These four years go by incredibly fast and I hope they learn to cherish every single moment they can.”