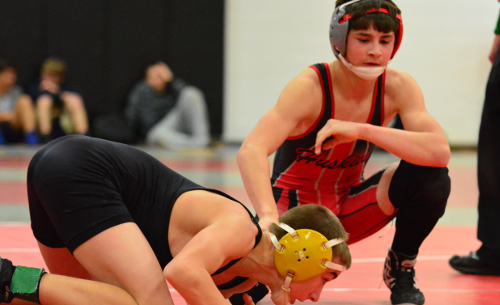 Cardinal finished just 3-5 in the finals of the 2015 Northwestern Husky Invitational on Saturday but two of those wins were for championships.

Trent Mast finished first at 113 pounds and Ian Mast won the 126 pound title. Brandon Neikirk was second at 132, Donovan Drebus was third at 195 and Brandon Nevison (120), Craig Shanower (138) and Khaleel Samir (160) all finished sixth for the Huskies. Bryan Havel finished eighth at 182.

“There’s always room for improvement but we wrestled well all day,” said Cardinal coach Jeff Zeigler. “We seem to struggle in the finals. I’m not sure if it’s the kids are getting better or we’re tired. We only won three out of eight. That’s not a very good ratio.”

The Huskies finished sixth overall with 126 points. Host Northwestern won the tournament with 229 ½ points. Wellington was second with 176 and Norwalk St. Paul was third with 171 ½.

Ian Mast finished second the past two seasons and finally stood atop the podium on Saturday. He beat Smithville’s Dylan Unkever, 16-11.

“He had a little scare in the finals,” Zeigler said. “He was winning by 12 then ended up giving up six points in the last minute of the match. He was in control enough to keep control of the match to pull off the win.”

Neikirk dropped a 12-0 decision to Northwestern’s Kyle Case in the 132 pound final.

“He wrestled well all day but he seems to struggle in the finals,” Zeigler said. “I don’t know if it’s mental preparation with him but he did have a tough kid in the finals.”

Drebus pinned his way to third place at 195.

“He was really the aggressor the whole match,” Zeigler said. “He ran a lot of stuff and what he needed and what he got in that finals match is mat time. He’s been out of wrestling the last couple of years due to injury so that was nice to see.”

Despite his sixth place finish, Nevison continues to impress his coach.

“Week after week he keeps impressing me,” Zeigler said. “He was 2-2 in duals in a tough weight class so that dropped down to the fifth place match. In a regular tournament style he would have placed higher. He lost a match that could have gone either way in the finals but he keeps improving.”

Shanower returned from an injury to finish sixth at 138.

“He definitely wasn’t 100-percent and by far his cardio was way down but what a real pleasure it was to have him back in the lineup,” Zeigler said. “He looks OK for the rest of the season.”

Cardinal hosts a quadrangular with Independence, Kirtland and Harvey on Friday.