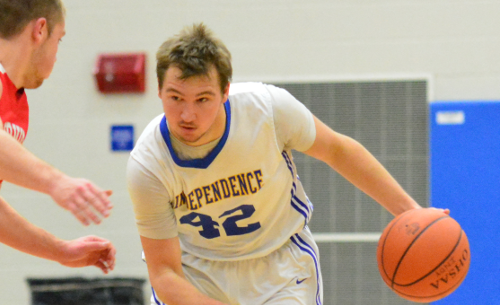 With just one senior on the squad the Independence basketball team has had some ups and downs this season. Consider Friday’s 63-46 win at Berkshire as a high point of the year.

“I would say that was probably the most complete game and a complete team effort from the coaching staff and every single player that participated and even our injured guys were fired up on the bench and keeping guys up,” said Independence coach Hugh McMahon. “Everybody contributed in a positive manner. It was great.”

The Blue Devils turned to their senior, Daniel Mathews, to provide the bulk of their offensive scoring.

Mathews scored a game-high 21 points and provided the on-court coaching McMahon likes to see out of him in a season where not everything has gone Independence’s way.

“He doesn’t know it but he’s a great leader,” McMahon said. “He’s done a phenomenal job leading these guys. He’s bringing these guys along. That’s to his credit. He could easily look at it in a negative situation but he sees it as a challenge and he’s stepped up to the challenge.”

Mario Figliola added 14 points for the Blue Devils and Kyle Stefanski and Nick Brunsman chipped in with 11 and nine, respectively.

“Everybody played well,” McMahon said. “We made some mistakes but everybody picked themselves back up. We had a couple freshmen on the floor and everybody was able to shake off their mistakes and go down and play. That’s the character that we need to have to be a successful team.”

McMahon credited Brian Roddy for his work on the boards.

“We had kids like Brian Roddy come in and get rebounds and we had other guys who really defended and denied their best player the ball,” McMahon said. “Across the board it was an outstanding team effort.”