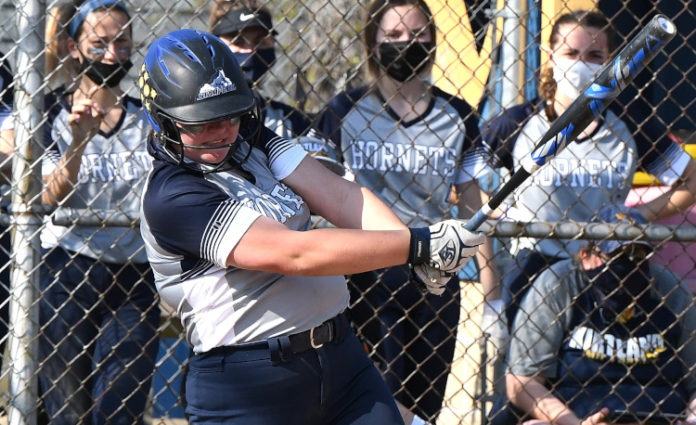 Madison Matijevic knocked in four runs in leading Kirtland to a 12-2 five-inning win at Cardinal on Tuesday.

With the win, the Hornets bounced back from a disappointing one-run loss at West Geauga on Monday.

“It was a great day today,” said Kirtland coach Jamie Kamensky. “It was nice to see the girls have a short memory. That just shows the resilience these young women have demonstrated all year. They have a hunger to get better but they don’t let their past define the future.”

Gianna DiFranco led off the game with a single and Matijevic knocked her in to give the Hornets an early 1-0 lead.

Kirtland added four runs in the second when Maya Hill was hit by a pitch with one out and DiFranco doubled her home for a 2-0 lead. Malia Becker then drew a walk and both runners stole a base. Matijevic then hit a two-RBI single and scored on two stolen bases to push the Kirtland lead to 5-0.

“It’s super satisfying to come out and have such a big game to help out and get the win,” Matijevic said. “We’ve had a lot of ups and downs this season but the game today and the game yesterday against West G are definitely proving that we are heading in the right direction as a team.”

Nikolena Samac, who was 2-for-3, sparked a four-run third inning when she hit a leadoff single. Stephanie Drazetic walked, Hill reached on an error, and Morgan Carmosino walked to load the bases with one out.

DiFranco walked in a run and Matijevic hit her second double of the game to increase Kirtland’s lead to 9-0.

DiFranco and Samac both finished the game with two hits and Cantini knocked in three runs.

“It was good to see a group of girls having a big day,” Kamensky said. “It gives our defense a little wiggle room and support to our pitcher.”

Matijevic is now 5-for-6 with three doubles and six RBI in her last two games.

“I think having some games under my belt has really made me more comfortable and confident stepping up to the plate,” she said. “I used to be so focused on trying to crush the ball, but now my only mentality is what hit is going to be the best for the team right now during this at-bat. Having the high school game experience has really made me realize that it’s not about hitting home runs every time, but instead about getting on base and scoring the runners consistently.”

“Gianna’s pitching has been on fire recently and the defense has really stepped up in making the plays we need,” Matijevic said.

Hailey Keller had all three of Cardinal’s hits and she knocked in both Husky runs.

Huskies pound out 12 hits in win over Fairport