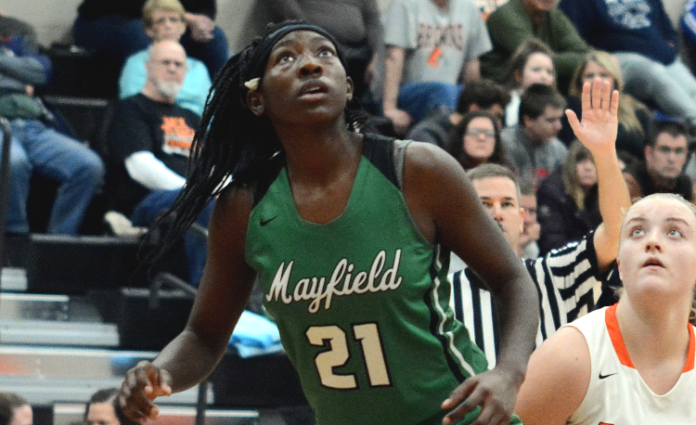 Mayfield took a six-point lead into the fourth quarter then held off a Madison rally in a 50-49 win over the host Blue Streaks on Wednesday.

The Wildcats led by seven with 1 minute, 30 seconds remaining in the game.

“It was good to get a conference win,” Mayfield coach Ryan Looman said. “Madison plays hard and has enough firepower to stick with teams. To their credit, they didn’t stop fighting and were able to get a couple steals and closed that gap a little bit.”

Mayfield, who improved to 7-7 overall and 3-4 in the Western Reserve Conference, led 12-6 early then stumbled in the second quarter as the Blue Streaks used a 21-11 run to take a 27-23 lead into the break.

The Wildcats turned the table in the third quarter and outscored the Blue Streaks, 14-4.

“We had a really good first quarter but we kind of took out foot off the gas pedal on the defensive end,” Looman said of the second-quarter lapse. “We let them get to the paint, they were beating us to rebounds and we were putting them on the free throw line. Everything that could go wrong did in the second quarter. In the third quarter, I thought that was some of our best defensive intensity all year. They didn’t score until under two minutes were left in the quarter.”

Catherine Rock led Mayfield with a game-high 16 points and Madeleine Finotti added 11 but Dae’Shawna Harwell stepped up and scored six of her seven points in the fourth quarter to help hold off the Blue Streaks.

“It is pretty exciting to be able to be there for my team but I wouldn’t have been able to do it without the support from my team,” Harwell said. “We played hard and tough and everything came together. In the fourth quarter, I was just trying to focus and play smart and make good decisions so my team can leave with a win. A game like tonight definitely helped me see the potential, not only in myself but for my team and hopefully we bring home more wins.”

Chloe Lewanski and Kirsten Woleben both scored in double figures for Riverside with 15 and 13, respectively.

“Ashley Dearden was phenomenal defensively on her all night,” Looman said of the Dearden-Montagner matchup. “She held her to two field goals.”