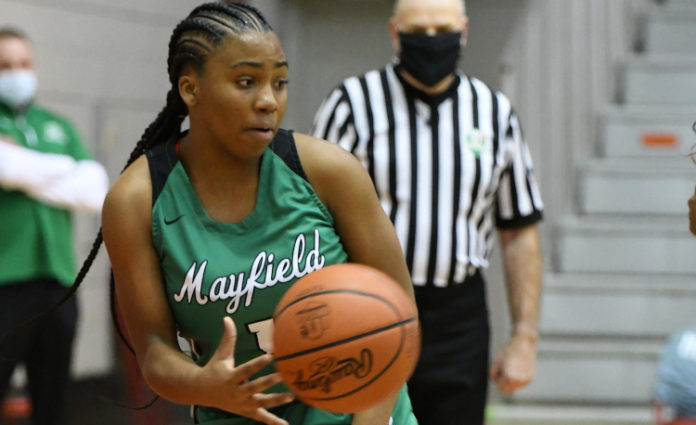 Mayfield’s season came to an end on Thursday with a 46-36 loss in a Division I sectional final at New Philadelphia.

The Wildcats, who closed out the year with an 11-12 record, hung with the Quakers until midway through the fourth quarter.

“I think tonight we played with such great effort and passion throughout the game,” said Mayfield coach Ryan Looman. “Our effort and energy matched theirs, we were going the extra step to get loose balls, and we were attacking the hoop. To their credit, they made some adjustments and our shots didn’t fall as the game wore on. Having it close midway through the fourth gave us some hope but we just couldn’t get over the hump late. I think our legs started to go and that intensity we played with for three and a half quarters was just a little off and against good teams, that can hurt.”

New Philadelphia led 15-12 after the first quarter but the Wildcats rallied in the second and outscored the Quakers, 10-8, to pull to within 23-22 at halftime.

“We played some of the best defense we have all year,” said Looman of that second-quarter run. “We were on point in so many things. On the offensive end, we had great spacing and ball movement and that allowed for players to get loose.”

Uriah Jennings scored eight of her game-high 21 points in that second quarter.

The Quakers took a four-point lead into the final eight minutes and methodically added to their lead as the final whistle neared.

Mayfield hit a couple of clutch shots to stay in the game but the Wildcats couldn’t consistently stop the Quakers down the stretch.

Mayfield’s season came to an end but the Wildcats have a lot to be proud of this season considering they were one of just a handful of teams to have played a full slate of regular-season games.

“Getting 22 games in was a result of dedication and teammates putting their teammates first,” Looman said. “I am so thankful to be coaching in a school that saw players, coaches, trainers, and administrators working together to make it happen. Then we had great support from our parents in doing it as well. Not only did we get 22 games in, but this was one of the most fun seasons we’ve had. Starting 1-5 and finishing strong, winning double OT or OT games, seeing buzzer-beaters, this season was filled with moments these girls will never forget and I hope they understand that. All along the way they did it together and that makes it mean so much more.”

“We have such great kids at Mayfield and this senior class is a product of that,” Looman said. “I say it all the time, but if I had a daughter I could walk into our practice and find a young lady who she should model herself after. This group of five had to deal with anything but a normal season and yet they led us every step of the way. Whether it was zoom workouts or off-season challenges, they were there. When workouts started back, they were there. And when the season came, we depended on them. This class had players fill so many roles throughout the season I don’t think we could name them all. Seeing them walk off the court one last time tonight was obviously sad, but we are so thankful to have young ladies like them in our program who help push us forward. They truly are another class that our younger players should emulate.”

Looman hopes the younger Wildcats learned a lot from their senior teammates, who persevered time and time again against all odds.

“I hope our younger kids realize the positive example that has been set this season in our program,” he said. “It’s never what happened but rather what is next. Keep striving to improve with the right mentality and great things await.”

Wildcats close out 2019 with win over Lake Catholic