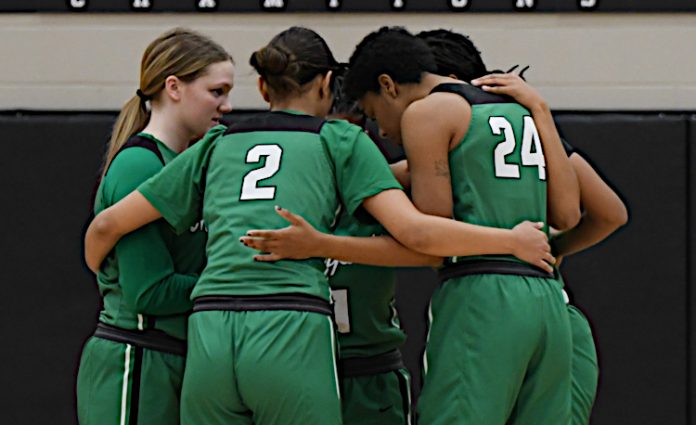 Mayfield overcame a slow start and then held off host South down the stretch in a 47-43 Western Reserve Conference game on Saturday.

The Wildcats trailed after the first quarter, 10-3, and at halftime, 24-18, but rallied in the second half to win their fourth game of the season.

“We just didn’t value the basketball in the first quarter,” said Mayfield coach Cullen Harris. “We were not being strong with the ball and we were playing really passive. They’re a good basketball team and they were playing aggressively on offense and pushing the basketball but we god some nice spots and were able to keep it kind of reasonable because without that effort on defense it easily could have been a 15 to 20 point game at halftime.”

Mayfield’s fortunes changed in the second half and the Wildcats went on to outscore the Rebels, 29-19.

The Wildcats leaned on Hannah Peterson and Sincere Lucas in the paint to take control of the game.

Lucas scored a game-high 12 points and Peterson finished with six.

“We settled into the rhythm of the game,” Harris said. “We started understanding what to expect from them defensively and where we had our advantages. We started getting the ball to Hannah and Sincere inside and they started cleaning up some offensive rebounds.”

Lucas, who had some big games as a sophomore, didn’t play last season as a junior.

“It was great to have a big contribution in our win today,” Lucas said. “It felt amazing to beat a conference rival with me coming back to play this season.”

Regardless of her stats, Lucas focuses on working hard to help the team in any way she can. In some games, she’ll pull down key rebounds, and in others, she might lead the team in scoring.

“Working in the paint has its struggles but it’s important for me to do my job and even more outside of my role at times,” she said. “My scoring is important but there’s no sadness if I score one time. My mom says two points is better than zero. Those two points can win the game and I’ll be proud of myself just for helping my team win.”

With a big game to her credit, Lucas is even more confident heading into the heart of the season.

“The way I played just proved that I can do it and excel,” she said. “Even though I had a hard time getting to the rim, I had more positive acknowledgment than negative feedback. More positivity trumps negativity on all levels, and my team delivered that boosting my confidence.”

“We really challenged them,” Harris said. {We just tried to emphasize pushing the pace of tempo. We’re kind of an inexperienced group of kids and I think for us, pushing the ball on offense leads us to playing more engaged and focused defense. As a coach, I’m learning more about these kids and what works well. I think we have really good athleticism that I don’t know that I utilize it correctly as far as our full potential, so we’re trying to figure out what works for us how we can click the right buttons.”

Grace Woodcock and Emma Woolnough both finished with 11 points for South and Alyssa Tekavec added eight points for the Rebels.

With the win, Mayfield improved to 4-2 overall and 1-1 in the WRC. The Wildcats travel to Chagrin Falls on Monday.