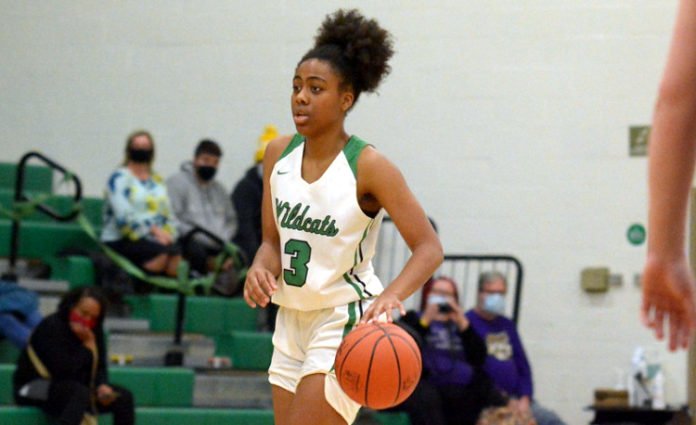 Mayfield’s game experience this season paid off as the Wildcats held off a hard-charging South team in the Western Reserve Conference opener for both teams.

The Wildcats, who improved to 8-7, jumped out to a 12-2 lead after the first quarter but the Rebels, who dropped to 0-2, rallied back to take a 34-32 lead heading into the fourth.

“Today was huge for us in terms of getting a win,” said Mayfield coach Ryan Looman. “Starting off league play with a win is always nice, but doing it coming off two losses is equally important. This was six games in nine days for us and to come out of that stretch 4-2 with a little momentum building is huge. Now the next step is to continue to build off of this next week.”

Uriah Jennings, Ashley Dearden and Hannah Peterson all scored in double figures for the Wildcats.

Jennings led Mayfield with 17 while Dearden and Peterson pitched in with 16 and 10, respectively.

“Those three in double figures scored in a variety of ways,” Looman said. “Uriah was excellent tonight attacking the hoop in transition and in the half court. Ashley took advantage of the extra pass out of traps and against their zone and knocked down some big shots and then Hannah was able to score in the paint off some great reads by our guards and on put-backs. The key to all of that is each player understanding their role and being patient in our offense in waiting for times to capitalize.”

Mayfield extended its lead early in the second quarter but the Rebels, who were playing in just their second game this season, found their rhythm on the offensive end and tightened up on defense.

By the end of the quarter, South had pulled to within 24-17.

“For the first quarter and a half, I thought we executed our defensive game plan very well and we were very aggressive defensively,” Looman said. “Then that intensity seemed to wane when we got out to a double-digit lead in the second and to South’s credit, they fought and hit some big shots to get back into it by the midway point in the third. Credit goes to our girls for not backing down and understanding what we needed to get back in order to win. During timeouts and in between quarters we just preached energy and effort. Then I think experience played a big role late as we’ve been in these spots before.”

Grace Woodcock, who played sparingly in South’s season opener on Wednesday, sparked the Rebel offense. She finished with a game-high 18 points.

Kailey Minch also scored in double figures for the Rebels as she dropped in 13.

“It was definitely frustrating to not be able to be out there with my team in our first game,” Woodcock said. “Even though we didn’t get the result we wanted, I always have so much fun playing with my teammates. I have to give most of the credit for my success today to my team. Kailey does a great job facilitating and making things happen, so I just had to make the shots I was expected to make.”

Woodcock drained five 3-pointers as she led the Rebels back after a sluggish start in the first quarter.

“I think the biggest adjustment we made after the first quarter was on defense,” she said. “We made some defensive changes that helped us match up better against the height that they have in the post and because of that we were able to get more takeaways that turned into offense. Cleaning up turnovers was also important because a lot of their points in the first quarter came in transition and on fast breaks.”

South outscored Mayfield in the second quarter, 15-12, and in the third, 17-8, but the Wildcats made several key plays in the fourth quarter to seal their win.

“I’m proud of these players and how they continue to focus on doing what it takes to win,” Looman said. “Six games in nine days is a lot and we’ve played so many different styles of teams. To come into today with no real prep or practice for South and do everything we asked of them was great to see. Sure, South made us pay in some spots today, but the girls didn’t waver and continued to pick each other up.”

Peterson recorded a double-double for Mayfield as she also led the Wildcats with 10 rebounds in the game.

South hosts Chardon on Wednesday while Mayfield travels to Riverside.

North rolls to win at South