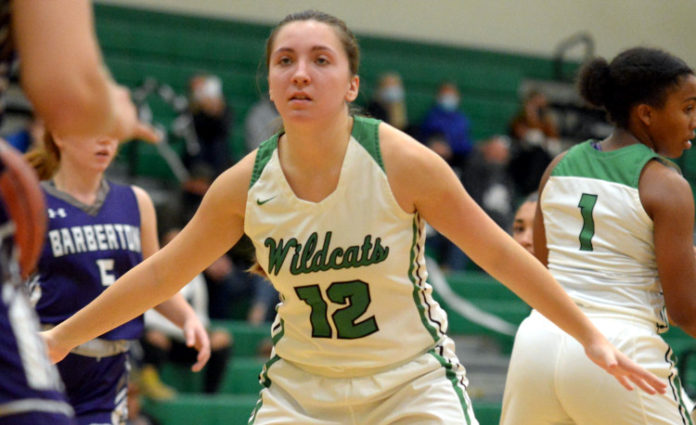 Mayfield expected a competitive game against Independence and the Wildcats weren’t disappointed as they held off the visiting Blue Devils on Tuesday, 40-35.

A Division I program, Mayfield needed a game and Division III Independence was willing to play anyone, anywhere.

The Blue Devils finished last season 22-0 before falling in the postseason and they won 19 games the season before, so Mayfield knew it had to play at a high level to pull out a win.

Mayfield’s game plan began with slowing down Independence standouts Riccela DiGeronimo and Anna Weber and slowing down Madison Stepanik in the paint.

“Our own goal going into the game, and we stressed this to the kids the last couple of practices, we knew that DiGeronimo and Weber could score and we were worried about Stepanik’s size,” Looman said. “We knew we had to slow them down or at least attempt to and I thought our girls did a really good job executing that.”

Mayfield’s Ashley Dearden rose to the challenge as she limited DiGeronimo to just 13 points while she scored a game-high 15 on the offensive end.

“She was really good on DiGeronimo defensively and made her work for all those points,” Looman said. “She was very patient offensively and took the shots when they were there. She’s a streaky shooter and you kind of get the feeling once she makes the first one that she’s going to have a decent night. She’s done that in the past and luckily tonight she was our answer.”

Dearden drained four 3-pointers in the game including two in the second quarter as Mayfield tied the Blue Devils at the half, 20-20.

“I think that our offense was running very smoothly tonight, which then allowed me to get open in order to make some key plays,” Dearden said. “I am very excited that we have started playing as a team and winning two close games will give us more momentum moving forward.”

Olivia Nicolli also stepped up for the Wildcats as she held Weber to just seven points.

“She’s all of 5-foot-7 and a string bean but she hung with Weber and was able to make her work for everything and contested everything she tried to do,” Looman said. “They used their height to their advantage a couple of times and I thought we weren’t very tough defensively in the first quarter but to our girls’ credit, their energy was a lot better in the final three.”

Stepanik added 12 points for the Blue Devils while Gabby Moore contributed to Mayfield’s win with seven and Uriah Jennings finished with five.

The win was the second straight for the Wildcats, who improved to 3-5 overall.

More importantly, the Wildcats are gaining confidence in close games.

“To go up against a well-coached Independence team with some really nice players and to have to gut it out and play four quarters of basketball, I thought that was really big for us,” Looman said. “Those close games, win or lose, teaches you a lot about who you are as individuals and as a team because you can band together and work together throughout the game and every possession matters.”

Mayfield plays at Cloverleaf on Jan. 7 while Independence (4-2) hosts Berkshire on Saturday.