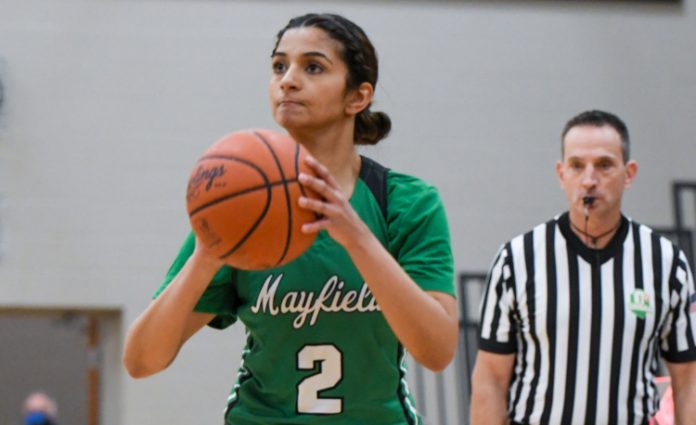 Mayfield extended its winning streak to five straight games with a 48-43 win over visiting Riverside on Monday.

The win over the Beavers was the second for the Wildcats in six days.

“It’s exciting to win and it’s great to have a little winning streak going but at the end of the day, whether we win five in a row or lose five in a row, we’ve still got to be ready for North (on Wednesday) because they’re going to come in prepared and want to beat us,” said Mayfield coach Cullen Harris. “We’re going to enjoy this tonight but tomorrow, we’ve got to come in and put in some work to prepare for our next game on Wednesday.”

Riverside entered the game having won six of its last seven games—with a 48-47 overtime loss to Mayfield last Wednesday.

The Beavers beat North on Saturday, leaving three teams within two games of the first-place Rangers.

Riverside opened the game with a 9-8 lead after the first eight minutes. Mayfield rallied in the second quarter and took a 24-22 lead into the break.

The Wildcats and Beavers traded baskets in the third quarter, none bigger than Nav Buttar’s 3-pointer.

“They made a switch to a zone (defense) and they left Nav wide open,” Harris said. “She made the 3-pointer and we went up a little bit. That was a huge shot.”

Hannah Peterson, Uriah Jennings, and Alex Duncan all scored in double figures for the Wildcats. Peterson finished with a team-high 13 points, Jennings contributed with 12, and Duncan finished with 10.

“(The winning streak) is a testament to these kids and understanding what we’re looking for,” Harris said. “Uriah has grown so much in the last three or four weeks and they’re starting to trust one another and trust their coaches. It’s that trust we’re trying to accomplish and you can go a long way with it when you’ve got five kids playing as one.”