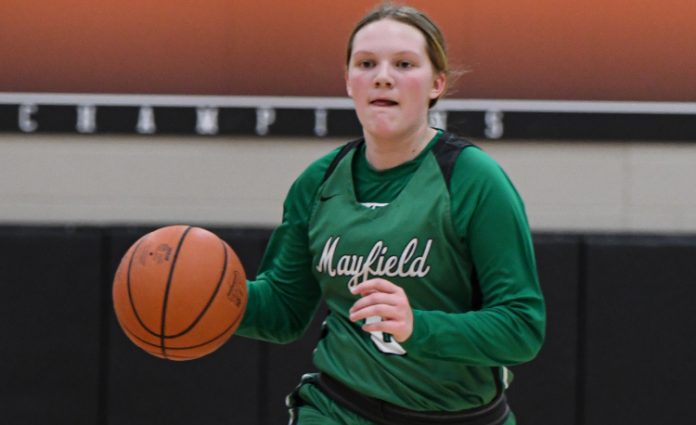 Mayfield picked up its biggest win over the season on Wednesday by beating host Riverside in overtime, 48-47.

The Wildcats now are back over .500 for the first time in a month and playing with confidence and determination.

“It was a good win for us, absolutely,” said Mayfield coach Cullen Harris. “I told the girls we’re turning a corner and we’re figuring it out. It was a great effort.”

Mayfield, who improved to 7-6 overall and 2-3 in the Western Reserve Conference, held a slim 11-10 lead after the first quarter, but trailed at halftime, 16-14.

The Wildcats picked up a big spark when Gabby Moore drained a 3-pointer with 90 seconds left to help force the overtime period.

Moore struggled early in the game but delivered in the clutch.

“I was missing like crazy,” Moore said. “My teammates kept finding me, so I kept shooting. I think I missed one and one of my teammates got a put-back or something, and coach told me, ‘You’re going to get that shot again, I need you to shoot it.’ Well, I got the shot again and thankfully, knocked it down.”

“I really like her shooting the basketball,” he said. “I believe every time she shoots, it’s going to go in. After the first four or five (misses), I just kept telling her that we’re going to need one of those and the next one is going to go in. Sure enough, the next one got reversed and she knocked it down.”

The Wildcats then jumped out to a seven-point lead in overtime but the Beavers pulled to within two points. Alex Duncan hit a free throw to push the lead to three. Riverside added a bucket but the Wildcats ran out the clock.

“We went 1-for-6 in the last 45 seconds,” Harris said. “Give Riverside credit, they kept attacking hard and they made some big shots. It wasn’t the textbook way to end a game but at the end of the day, we made the one that mattered.”

“It was super exciting to be able to pull this one out,” Moore said. “The game was back and forth, and to be able to win in OT is great. This win definitely boosts our confidence and gives us momentum moving forward. We’ll keep putting one foot in front of the other, and play each game one at a time. As coach Harris would tell us, ‘Control the controllables, which are energy and effort.’ As long as we do that, we’ll be just fine.”

Isabella Bozic, Samantha Volpe, and Savanah Laurenty each scored in double figures for Riverside. Bozic finished with 14 while Volpe and Laurenty scored 13 and 10, respectively. Amanda Kolar added six points for the Beavers and Sofia Valvoda finished with two.