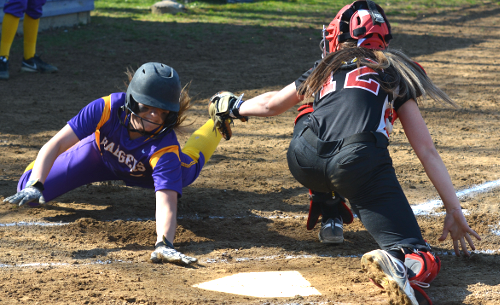 BURTON—Berkshire junior shortstop Shannon McGee pounded out three hits, all doubles, and knocked in five runs to lead the Badgers to a 15-5 six-inning win over rival Cardinal on Friday.

The Huskies led 3-2 in the second inning before the Badgers reeled off nine straight runs to take control of the contest.

“We just have too many errors,” said Cardinal coach Dennis Ikeler. “We’ve got too many mental errors. They’ve got to want it. They didn’t want it as bad as Burton. Burton is a good team. I have a lot of respect for this team. They’re a real nice team but there’s no reason we should have been run ruled in this game, none whatsoever.”

Cardinal’s first mistake, one the Huskies couldn't have prevented, came on the bases in the first inning when Ashley Shepard and Megan Baril both singled with one out. Berkshire pitcher Kylie Scott then snagged a sharp line drive off the bat of Dawn Scribben and threw to first base for the inning-ending double play.

The Badgers went up 2-0 when Scott and Malia Miller both reached safely and McGee doubled to left center.

A heads up play by Scribben at first base prevented the Badgers from adding another run when McGee tried to score from second on a fielder’s choice. Scribben made a perfect throw to catcher Haley Adams, who tagged out McGee for the second out of the inning.

Adams led off the second with a triple, which turned into Cardinal’s first run when Berkshire’s throw to third went out of play.

“Haley has been struggling all year. Today was actually her first real good game offensively and she’s finally getting the bat on the ball,” Ikeler said. “We’ve been working with her a lot and she’s finally getting her confidence level up at bat. She came around great today. She’s turned it around. I’m real proud of Haley with what she’s doing offensively right now.”

Cardinal took advantage of a few Berkshire mistakes to tack on two more runs for a 3-2 lead.

After that, it was all downhill for the Huskies.

Three errors and another McGee double gave Berkshire a 5-3 lead after two and the Badgers went on to score one in the third and five in the fourth to pull away from the Huskies.

“I just think that we have talked a lot about being smart out there, enough with the throwing it around and getting nervous,” said Berkshire coach Shannon Moore of her team’s rebound from the early deficit. “It’s more like if you make a mistake you’ve got to calm down and get it together. I told my captains it was time to get it together and pick the team up. I think they have great communication skills. My team gets along very well so they’re able to see their mistakes and figure out what they have to do then for the next play.”

Adams singled home two more runs for the Huskies in the fifth but that’s all Scott would allow as she shut down the Cardinal bats for most of the game.

“Kylie Scott is also another one of my captains. I named her captain this year because I know she can step up,” Moore said. “She’s got complete confidence in herself. She knows that her entire team and coaching staff has complete confidence in her. She knows how to get back into it and she knows what pitches work and what doesn’t work. She knows that if something isn’t working then she’ll adjust and she adjusted accordingly. When she does adjust she lets the defense know.”

Meanwhile, Cardinal pitcher Jasmine Vunak gutted out five innings of work despite suffering from a high ankle sprain. Baril finished the game for the Huskies.

“Jasmine, she went out there and pitched five innings on a high ankle sprain,” Ikeler said. “She toughed through it and did a decent job for the condition she was in.”

The Huskies, who dropped to 0-4, travel to Harvey on Monday in search of their first win. To do that, they’ll have to clean up their mistakes on defense and continue to be aggressive at the plate.

Berkshire hosts a doubleheader with Grand Valley on Saturday.