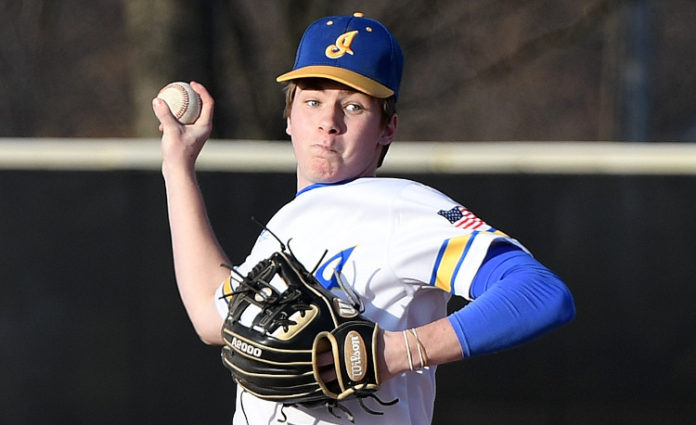 McGhee does it all as Independence tops Beachwood

Independence junior Casey McGhee pitched eight scoreless innings and delivered the game-winning hit in the bottom of the eighth inning of the Blue Devils’ 1-0 win over visiting Beachwood in a battle for first place in the Chagrin Valley Conference Metro Division.

With the win, the Blue Devils are alone in first place with two games left to play, including one at Beachwood on Tuesday.

“What a game,” said Independence coach Jim Crooks. “Few times in team sports do you see one person kind of take control and really have everything line up and Casey was that person today. He pitched eight great innings and got the key hit to win it. It was awesome.”

McGhee stepped to the plate in the bottom of the eighth inning with two outs and Mike Andryszczyk, who reached on a fielder’s choice, at first base.

After striking out in his last at-bat, McGhee was ready to do whatever he could to win the game.

“I wasn’t hitting very well so far that game but I was still confident in myself,” he said. “Coach put on the hit and run on with one strike and I took an outside fastball to right center.”

Andryszczyk began his sprint to second base on the pitch and with McGhee putting the ball in the gap between the right fielder and center fielder, Crooks never thought about holding up the runner at third.

“The ball was perfectly placed,” Crooks said. “We set the runner in motion on a hit and run and he put it right where it needed to be. We were going for the win.”

The walk-off hit for McGhee was his first since he did it as a 12-year old during a tournament in Cooperstown.

“It’s a great feeling to be there for my team both pitching and delivering a big hit,” McGhee said. “We had a great week of practice and a great game against Trinity before the first Beachwood game. As a team, we were very confident going into the game today and stepped up to the pressure.”

Independence and Beachwood both entered the game with identical 7-2 conference records.

The game lived up to its billing as McGhee and Beachwood’s Jordan Levin turned the matchup into a pitcher’s duel.

Levin allowed just three hits and struck out 10 in 7 2/3 innings while McGhee gave up just four hits and fanned five.

“Beachwood is a great team, well-coached, and we respect them,” Crooks said. “Their pitcher pitched well enough to win the game.”

A two-out double followed by a single gave the Bison a scoring opportunity in the top of the second inning but McGhee struck out the final batter of the inning to end the threat. The Blue Devils had a runner in scoring position in the bottom of the second but Levin returned the favor and struck out the third out to keep the game scoreless.

Beachwood managed just two baserunners after the second inning, one on a two-out single in the third and the other singled in the fifth with two outs. McGhee struck out the next batter to end the inning in both instances.

Levin was just as clutch for the Bison.

McGhee reached on an error with two outs in the third but Levin fanned the final batter of the inning. Rory Corrigan walked, stole second, and moved to third on an error in the fourth, but Levin responded by striking out two straight Blue Devils to keep his shutout intact.

Connor Blum doubled with one out in the sixth, but he was picked off second and Levin struck out the third out. Corrigan then reached on an error to start the sixth but he was caught stealing.

McGhee threw just three pitches in the sixth, which allowed Crooks to avoid going to the bullpen. McGhee finished the eight-inning game with just 86 pitches thrown.

“He and I made eye contact a couple of times and we were watching his pitch count, which was low,” Crooks said. “He had a three-pitch inning, which helped. It was a great day for him all around.”

Beachwood’s Jacob Greene forced McGhee to work in the top of the eighth.

Greene fouled off five pitches before McGhee slipped the third strike past him.

“I had a great attitude and good confidence going into the game today,” McGhee said. “On the mound hitting my spots and changing the batters’ elevation was key. Not repeating pitches and mixing in off-speed kept batters off-balance, which helped me succeed.”

Independence’s defense also contributed with key plays all over the field.

Several scenarios exist for both teams to win the conference title.

Independence controls its own destiny and can win the title outright with a win at Beachwood on Tuesday. Should the Blue Devils lose to the Bison in the second game of the series, they’d have to beat Trinity in the conference finale and root for Beachwood to lose to Brooklyn to win the title outright. A split in their final two games earns them at least a share of the title.