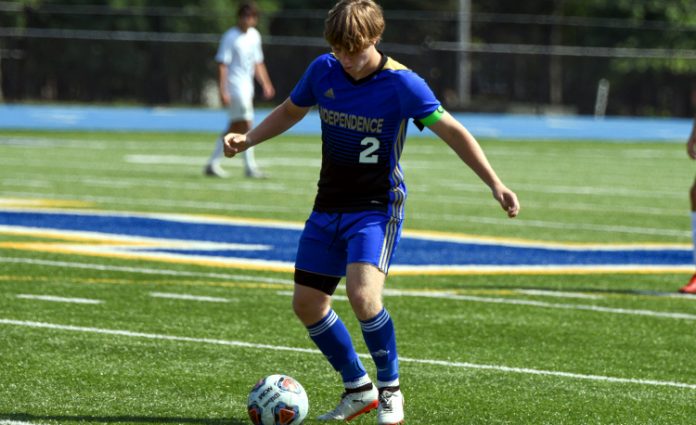 Casey McGhee’s goal off of a free-kick midway through the first half held up as Independence beat host Normandy at Byers Field on Thursday, 1-0.

A thunderstorm passed through the area that paused the game with about 15 minutes left in the opening half but the Blue Devils didn’t let that delay take them out of their game.

“I think us staying tough and staying within ourselves was key,” McGhee said. “We played together and communicated really well all game.”

Once play resumed, McGhee capitalized on a Normandy penalty and curled a free-kick just inside the post for the decisive goal.

“Their goalie was out of his box on a punt so we got a free-kick a foot out of the box on the right side,” McGhee said. “I honestly planned on floating a ball to Aidan (Coljohn) on the backside but Emmett (Stralka) told me to shoot it right before my run-up. I curled it around the wall and into the goal on the right side of the net.”

The Blue Devils, who improved to 11-2-1, held off the Invaders the rest of the way.

Despite winning double-digit games for eight consecutive seasons, the Blue Devils had to overcome their fair share of adversity to find success this season.

“I think our perseverance has been incredible this year,” McGhee said. “We lost Jack Panichi early in the season, who had a great pre-season, but Drew (Straub) filled in nicely. Having Jack back adds another physical athletic defender to the defense. Wyatt Snyder had been gaining more and more minutes and keeps improving and makes our team better. Sam (Eisenmann) has moved to a center defense mid-position behind me and has been a lockdown defender there also adding great passing.”

Braden Flynn recorded his fourth shutout of the year.

Independence closes out the regular season with a home game against state-ranked Kirtland and then a road trip to Padua on Oct. 16.

“We look really forward to next week with a tough matchup again Kirtland,” McGhee said. “As seniors, we have been trying to pick up the tempo and energy at practice. Braden has been a growing leader in the net. Our attackers Aidan and Emmett have been jelling up really nicely and we look forward to next week and playoffs.”

Casey McGhee’s goal was all the Blue Devils needed. https://t.co/iHt2xdcHdF