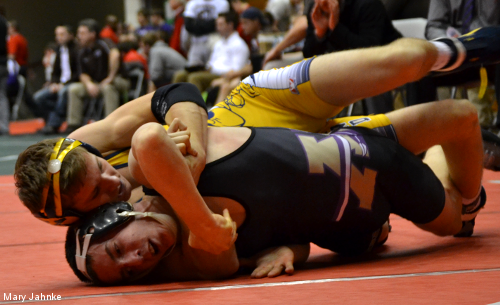 This time, the No. 6 Hornets came up on the short end in a 50-24 loss to the third-seeded Indians, who advanced to wrestle No. 2 seed Dayton Christian in the Division III state semifinals.

Brendan Williamson gave the Hornets an early 6-0 lead when he collected a forfeit at 106 pounds. Mechanicsburg then won the next two weight classes, one by technical fall and the other by pin, to take an 11-6 lead into the 126 pound bout.

That’s where Blake Andonian overcame a 14-6 deficit to Mechanicsburg’s Sam Rozmus to win by pin in 4 minutes, 50 seconds to put the Hornets on top, 12-11.

“Blake has that ability in any match to hit a move where he comes out on top of the kid,” Francis said. “That’s what we’ve been working with him on is when to take the chances, when not to take the chances, what type of chances (to take). In that match right there, a couple of the chances he took early on didn’t pay off for him. He didn’t end up going to his back because he put himself there, which is what he’s done before. In that match the kid caught him when he was trying to something. When a kid counters you and comes out on top there’s nothing wrong with that. I just had the feeling early in the match that Blake was going to come back and win that and he did that.”

Andonian wasn’t quite as confident as his coach.

“I kind of lost confidence through the match,” Andonian said. “I knew it was 14-6 coming into the third period. I knew I was struggling so I had to build up my confidence and come back and win. It was the best thing ever.”

Mechanicsburg’s Nick Miller defeated Mike Calvert, 11-5, at 132 but Kirtland’s Evan Francis responded with a 1 minute, 39 second pin at 138 to keep the advantage in the Hornets’ favor, 18-14.

Despite the loss, Francis believes the Hornets’ run to Columbus will help the program continue to reload in the future.

“All the kids coming up through our youth and junior high program, they know that this is something attainable for them; it’s not a pipe dream getting to the state tournament individually and it’s not a pipe dream getting there as a team either,” Francis said. “The whole state tournament process, I think it’s a lot of fun and I’m glad the state’s doing it. I think it’s going to be good for the sport. We’re taking all of our duals seriously. We’ve wrestled over 20 duals this year and every single one of them we’ve wanted to win. In the past years it’s just match some kids up and get them matches. Now it’s lets go out there and win the match.”