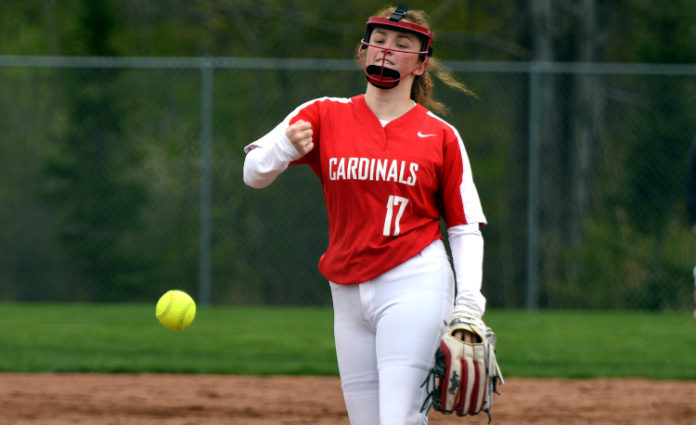 Mentor pounded out 14 hits and Leah Temple struck out 13 batters in an 8-2 win over host Elyria on Monday.

With the win, the Cardinals improved to 12-4 overall and 7-0 in the Greater Cleveland Conference. Mentor also swept the season series from Elyria for the first time in many years.

“We knew today was a must-win for us,” said Mentor coach Jo Bondra. “This team has one goal and it’s to put a banner on the wall in Mentor’s gym. We have been talking about this since March and each day they take the field in a conference matchup they get one step closer to that goal.”

The Cardinals struck first when Adrianna Sluga hit a one-out single in the top of the first and Abby Haydu hit a two-out single.

Sluga started a two-run third inning rally when she reached on an error with one down and scored on Temple’s double. Haydu then singled home Temple to make it 3-0.

A pair of singles and an error allowed Elyria to pull to within 3-2 but that’s as close as the Pioneers would get.

Sydni Bush, who finished the game 3-for-3, led off the Mentor fourth with a solo home run and the Cardinals added a pair of runs in both the sixth and seventh innings.

“It was the best feeling,” Bush said of the solo shot. “I knew I had to step up for Leah, who was pitching a great game, and for my team to get their energy up after not starting exactly how we wanted to. I saw the same pitch I saw at my last at-bat, which was inside. As soon as it hit off my bat, I knew I hit it hard but didn’t realize it was out until I was rounding first.”

Bush singled in the second inning and also hit a one-out single to start the sixth-inning rally.

“In my opinion, Syd is a player that should be talked about way more,” Bondra said. “Not only did she take one out today, but she is also solid behind the plate. She is an offensive threat to any opponent we play. She’s hitting .489 right now and when you look at the stat sheet there’s a zero under the strikeout column. She puts pressure on the defense and makes them make a play each time she steps up to the plate.”

Peyton Trick followed Bush’s sixth-inning single with a double to push the Mentor lead to 5-2. Addison Siedler then hit an RBI single to make it 6-2.

Sluga tripled and scored on a Temple base hit in the seventh. Ally Loparo reached on an error that scored Temple to make it 8-2.

Temple struck out two of the four batters she faced in the bottom of the seventh to close out the win.

“I am very satisfied with my performance,” Temple said. “I needed to keep changing speeds to keep them off balance. I also was working between throwing high and low to make sure I’m not staying flat.”

Temple finished the game 3-for-4 at the plate with two RBI.

“Temple constantly steps up for this team on the mound and at the plate,” Bondra said. “She finished with 13 strikeouts and two RBI, one being a bunt late in the game. She loves this game and she is constantly doing her ‘homework.’ She will come to a game and tell us what each hitter on the other team did their last game, or what specific players will do in specific situations. That’s why she is able to be so successful. She brings everything she has psychically and mentally each time she steps on the field.”

Sluga and Haydu recorded two hits in the win.

Mentor travels to Solon on Wednesday.

Mentor’s ‘Field of Dreams’ will have to wait