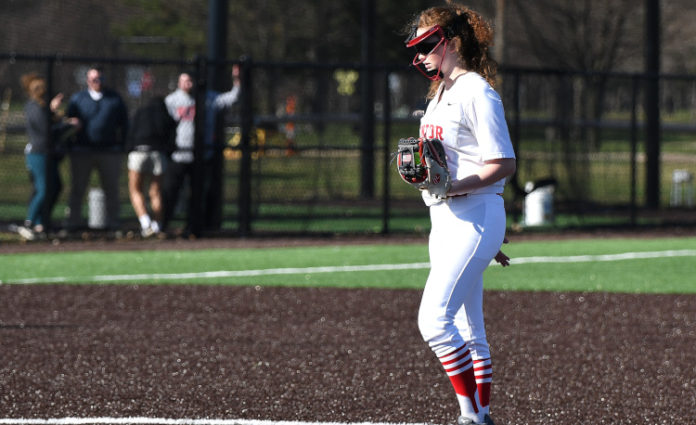 Leah Temple delivered one of her best overall performances of the season in leading Mentor to at least a share of the Greater Cleveland Conference title with a 1-0 win at Medina on Thursday.

The Cardinals, who improved to 15-4 overall and 10-0 in the GCC, last won a conference title in 2016. Mentor can win the title outright with a Medina loss or a win over Strongsville or Brunswick next week.

“That’s been our goal since day one,” said Mentor coach Jo Bondra of the league title. “It was a very exciting day for the team. They have worked really hard to get to this point. They deserve it.”

While the Cardinals are thrilled to have clinched at least a share of the title, they’re feeling selfish this season and want to win that title outright.

“They are locked in,” Bondra said. “Each conference game we play, they come ready to go. We have to take one game at a time and when we host Strongsville on Tuesday, we have to show up. I’m confident we will.”

Mentor had beaten Medina, 6-5, in their previous meeting this season, so Bondra and the Cardinals expected an intense game against the Bees.

Rather than wilt under that pressure, the Cardinals thrived.

Temple allowed just three hits and struck out 11. She also delivered the game’s only RBI hit.

“She has been a leader all season,” Bondra said. “She continues to bring positive energy to this team. She steps up offensively and defensively every game. She knew what she had to do on the mound today to get the ‘W’ and she did just that.”

Medina had advanced just two runners into scoring position until the bottom of the seventh when the leadoff batter singled and another Bee reached on an error that put runners at the corners with just one out.

“When I was in the circle, I had to calm everything down and trust everything I was throwing. I needed everything to be working in order to win that game today. I knew I needed my changeup to keep them off balance and I did exactly that. When I ended up getting two people on with no outs, I dialed in and knew I needed to calm down and throw what I knew I could. I dialed in and threw my best inning I could. When I threw that last strike I was excited.”

Bella Carcioppolo opened the game with a leadoff double and moved to third on a fielder’s choice, but the Cardinals couldn’t get the clutch hit to knock her in.

Sydni Bush singled in the second but the Bees turned a double play to get out of that inning.

The Cardinals then went in order in the third, fourth, and fifth innings before Carcioppolo and Temple teamed up to break the scoreless tie.

“If Bella gets on, she will likely score,” Bondra said. “It was crucial that Sluga got her bunt down to move Bella.”

Temple stepped into the batter’s box with one goal in mind.

She took the first pitch, a ball, and then hit the second one into center field to score the game’s only run.

“When there were two outs with a runner on third, I knew I needed to hit the ball to score,” Temple said. “To me, it was very exciting, but as a team it was even more thrilling. We knew this would make or break our chance to win the conference. We knew we had to come into the game and play our best and we had to make sure we played our best defense and make adjustments when hitting.”