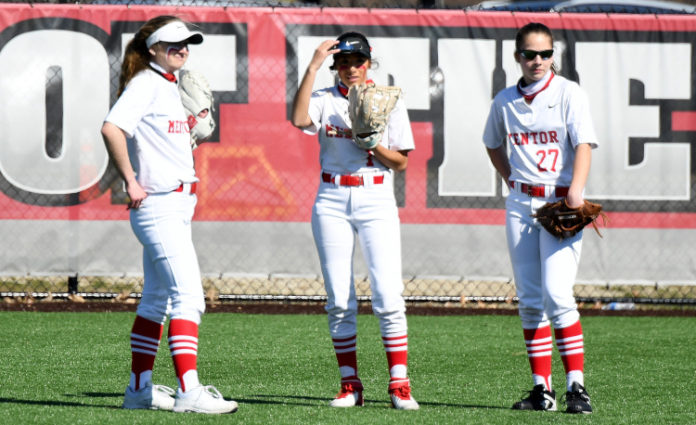 Mentor pounded out 14 base hits, including four that went for extra bases, and combined in the circle to allow just three hits in a 15-0 five-inning win over visiting Elyria on Tuesday.

With the win, the Cardinals improved to 3-0 overall and 1-0 in the Greater Cleveland Conference.

“It’s nice to win a game like that,” said Mentor coach Jo Bondra. “We go into each game with the same mindset and that’s to put as many runs on the board as possible. We have tightened some things up defensively and our pitchers continue to go out there and work hard every day.”

After a scoreless first inning, the Cardinals broke the game open with a four-run second. They added four more runs in the third and finished off the Pioneers with a seven-run fourth.

As a team, Mentor batted .518 with three doubles and an Allie Loparo home run, the first at the new stadium. Loparo and Abby Haydu both finished the game 3-for-3 at the plate.

“The key to their success was going up there and waiting for the pitch they wanted to hit,” Bondra said of Haydu and Loparo. “They were patient in the box today. It was awesome to have a senior be the first to hit one out first for us on that field. Haydu and Loparo always hit the ball hard and today they were just able to find the gaps. Having Haydu followed by Kiley Markowski, Loparo, and Sydni Bush leaves no room for opponents to pitch around our four-hole. You have three batters who follow her that are top offensive players.”

Bush finished the game 2-for-3 with two runs batted in and Bella Carcioppolo, Adrianna Sluga, Leah Temple, Markowski, Jill Reardon, and Addison Siedler each recorded a hit in the win.

Loparo, Haydu, and Reardon each doubled.

Haydu has been especially hot in the early goings as she is now batting .600 with three RBI and two doubles.

“Haydu is a great kid and she’s fun to work with,” Bondra said. “When we go in the weight room, it doesn’t matter what lift we are doing, she has the most weight on her bar. This carries over into her game; you can see that by how hard she is hitting the ball. She is also one of our smartest batters. She has a plan. She studies the pitcher when they throw to our first three batters. She’s a huge threat in our offensive lineup. I’m sure my uncle, Tony Bondra (who coaches at Gilmour) will take all of the credit for her early success, as he is her summer coach.”

Loparo didn’t play against NDCL in the season-opener on Saturday but she was 1-for-3 against Lake Catholic on Monday. She found her groove against perennial powerhouse Elyria.

“This win over Elyria is one that I will remember forever,” Loparo said. “Elyria has been our biggest competition in the past and to be able to completely shut them out, no runs on the board, feels amazing.”

Loparo finished the game 3-for-3 with three runs scored and an eye-popping six RBI.

She hit a one-run double in the second and she knocked in two runs with a single in the third. Her biggest swing came in the fourth when she hit a 1-1 pitch over the fence in center field to score three more runs.

“After not having the best offensive game against Lake Catholic yesterday, I just went in to today’s game with a new mindset,” Loparo said. “After my team strung along some hits, it really put me in a hitting mood. After such a good game versus a team that I have viewed as intense competition for years, I can definitely say that my confidence is at an all-time high. I am ready to go into the rest of the season with the same mindset and confidence as today, and hopefully, other teams will see me as a threat for the upcoming games.”

Mentor had allowed four games in both of its first two games.

The Cardinals shut down the Elyria hitters on Tuesday. The Pioneers managed just three hits off of Mentor pitchers Leah Temple and Kristin Dems.

Temple started the game and allowed two hits and struck out three in four innings of work. Dems pitched the fifth. She allowed one hit and fanned one batter.

“Our pitchers continue to give us a chance to win versus our opponents,” Bondra said. “I thought Temple threw really well today and Dems had another good showing. We have depth in the circle and our staff trusts each one of them when they step on the mound. I’ve said this since day one, we told our pitchers they have to be the hardest working ones on the field. They are held to a high standard and they have come out and met that standard these last three games. We are looking forward to getting back on the field Monday at Solon.”