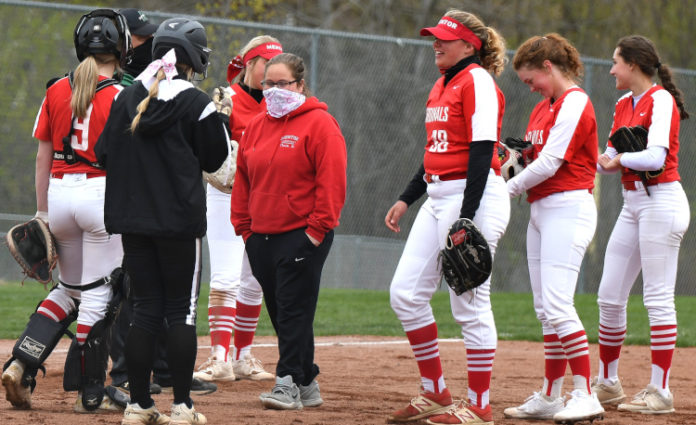 Mentor’s run through the Greater Cleveland Conference continued on Wednesday with an 11-1 win at Solon.

With the win, the Cardinals improved to 13-4 overall and 8-0 in league play.

“It’s very important that they go out there and get it done,” said Mentor coach Jo Bondra about taking a game-by-game approach. “We know that since we are undefeated everyone will likely play their best game against us so we have no time to take our foot of the gas or look ahead. Taking one game at a time is a key to our success.”

An error and a double gave the Comets an early 1-0 lead but it was all Mentor after that.

The Cardinals scored four runs in the second inning, three in the third, and two in both the fourth and fifth innings to invoke the run rule.

Mentor pounded out 15 hits in the five-inning win with Leah Temple, Allie Loparo, Sydni Bush, Peyton Trick, and Izzy Coode each collecting two. Bush, Temple, and Jill Reardon each doubled in the game.

Mentor has now scored 47 runs during its six-game winning streak.

“The key to keeping the offense rolling is to have a plan and not to change that plan,” Bondra said. “As a staff, we are stressing that they look for their pitch until they have two strikes, to relax in the box, and to have short swings. The hitting was contagious today. When one or two starts hitting they all start hitting. It was a good team win for us.”

Temple allowed one unearned run on three hits and struck out seven.

Trick finished the game 2-for-3 with two runs scored and a team-high four runs batted in.

She started the season on the JV squad but her success at the plate forced Bondra to move her up to the varsity.

“Trick is a high-level player,” Bondra said. “The only downfall is that she is a pitcher, and as everyone can see, we are riding Temple. We needed Trick to get pitching time on JV, but knew her opportunity would come with the varsity. We brought her to Elyria along with a few others and she took the ball to the fence. After that game, we decided she would DP at Solon. She got her opportunity and she took full advantage of it. It’s not the last time you will see her name in the starting lineup.”

Trick was 1-for-1 at Elyria with a double and an RBI.

She felt right at home in the varsity lineup.

“When I got added to the lineup, it felt great, but it felt even better when I helped contribute to the win,” she said. “I wasn’t all that nervous. I was more excited to prove myself to everyone and show them who I am and what I can do. This game against Solon made my confidence skyrocket and I am ready for the next competition.”

Mentor hosts Medina on Monday in a key GCC game. The Bees are 8-1 in league play.