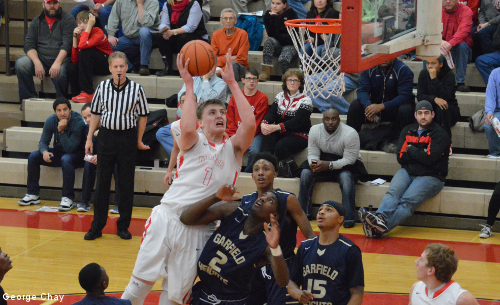 Mentor gets first win of season at North Royalton

Mentor got a much needed win Tuesday at North Royalton.

However, the 75-61 victory came with a price for the Cardinals.

Mentor senior guard Joey Zaugg left with an injury in the third quarter and will miss 1-2 weeks according to Coach Bob Krizancic.

The Cardinals were already playing short-handed with 6-foot-10 center Micah Potter on the bench with an injury that prevented him from practicing.

Andrew Valeri and Paul Sateika paced Mentor offensively in a game the Cardinals desperately needed after an opening-night overtime loss at home to Garfield Heights.

“We were a little ragged, but it was a game we needed,” Krizancic said.

“We lost Joey and we were playing without Micah so that part wasn’t good. We need to find some guys to step up. I thought Jack Korsok played well tonight. Maybe by the middle of January we have a chance to be a really good basketball team. We just have to get through a brutal schedule with a few injuries. But now is the time for other guys to get some meaningful minutes.”

Mentor (1-1) led from start to finish, jumping out to a 17-13 lead at the end of one quarter and increasing the advantage to 13 at the half.

Valeri led the Cardinals with 23 points, followed by Zaugg and Sateika, who scored 16 and 15 points, respectively. Mentor pulled away in the second quarter, scoring 28 points and took a 45-32 lead into the break.

Leading the way for North Royalton was Mitch Filippi, who scored 14, followed by Alex Miduri, who added 10 points.

“North Royalton was solid, but now we really need to play well on Friday (at Shaker Heights),” Krizancic said.

"We scored 75 points, you would like to see more. I still like this team and where we are going."