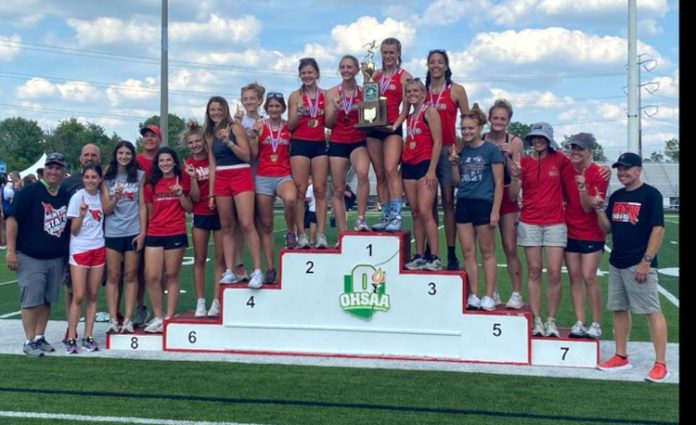 Following its first state title run in 2021, the Mentor girls’ track team is ready to regroup, reload, and do its best to defend that Division I championship.

After graduating several talented athletes, the Cardinals aren’t as deep as they were last spring but they have several key athletes back and a host of others ready to step up and do their part to help the team.

“I am very excited about this year,” said Mentor coach Bob Berwald. “We lost a lot of talented seniors last year, but this year we have a strong group of juniors and seniors that learned what it means to compete and win at the highest level. That, along with very good sophomore and freshmen classes, will help push the girls to get better in all events.”

Berwald will lean on his battle-tested athletes, especially early in the season, to set the tone for the rest of the Cardinals.

That starts with junior Savannah Dennison, who was part of Mentor’s state championship 4×800-meter relay team and also placed seventh in the 1600-meter run last spring.

“Savannah is one of the hardest working distance runners around,” Berwald said. “She will be a leader of the distance group and be looked at to make it to the state meet in several events.”

Senior Breanna Berwald, a John Carroll University commitment, is back after earning honorable mention All-Greater Cleveland Conference as a freshman and junior.

“Breanna is a very hard worker and leader of the throwers,” Coach Berwald said. “She will be looked at to place in the top three in all the meets this year.”

“Ella is as explosive of an athlete as I have ever coached,” Berwald said. “She will be looked at to place in the top three in all of the meets this year.”

Seniors Emma Meinke and Molly Stayer are among Mentor’s most experienced sprinters.

Meinke and Stayer both ran legs in the 4×200-meter relay to help the Cardinals place sixth at the regional meet.

“Emma is a leader of the sprinters. She is a fierce competitor and be the mainstay of the open sprints and relays,” Berwald said. “Molly came out for track as a junior and was a major contributor to the team in the relay events. She will be looked at to help get the 4×100 and 4×200 relay teams to the state meet.”

With a solid core returning and a deep roster, Berwald is confident the Cardinals will be a team to watch this spring.

To find success, the team will follow the same recipe that led it to the top of the state podium last spring.

“We have 85 girls on our roster and 33 of those are returning letter winners,” Berwald said. “The expectations are simple, to work hard every day and get better. If we do that, then we will set ourselves up to compete for a league and district title. Then, we will see where we are at for regionals and state.”

Of course, even with a large roster and several talented athletes, the Cardinals have their share of adversity to overcome.

“Our youth will be the biggest challenge,” Berwald said. “Of the 85 girls, 57 of them are freshmen and sophomores. They could be talented, but we won’t know until we get them into the meets.”

Seniors Casey Wachhaus and Ashley Cooper both have committed to run track and cross country at Mount Union.