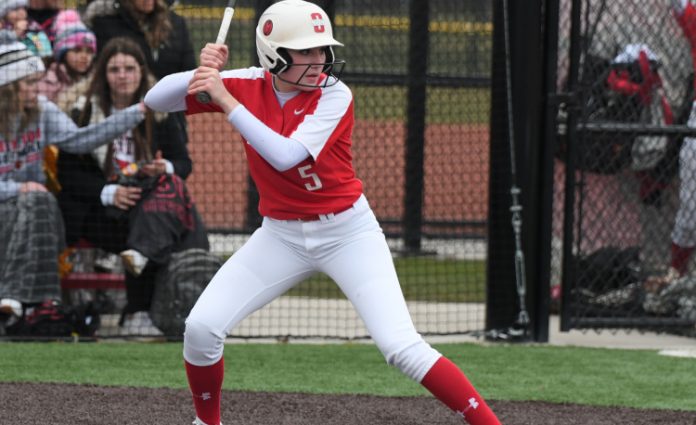 Mentor pounded out 22 hits in beating host Solon in a Greater Cleveland Conference showdown on Wednesday, 19-3.

The Cardinals scored seven runs in the first and second innings and added one in the fourth and four in the fifth to invoke the run rule over their hosts.

“Seeing the bats come alive today was great,” said Mentor coach Jo Bondra. “Our kids spend a lot of time on their swings during and after practice so this was rewarding for them as well. We brought in our bench players and we’re still hitting the ball hard. The offensive depth was great to see.”

Leah Temple, Bella Carcioppolo, and Peyton Trick hit back-to-back-to-back singles to open the game to give Mentor an early 2-0 lead. Abby Haydu was then intentionally walked and Sydni Bush was hit by a pitch to load the bases. After back-to-back ground-outs, Kiley Markowski hit an RBI single and Olivia Sacks followed with a double. Temple added a second single in the inning.

By the time the Comets had recorded the third out Mentor had scored seven runs.

Solon scored a run on three singles and a double in the bottom half of the inning, but the Cardinals responded with seven more runs in the second.

Trick, Haydu, Bush, Jenna Place, and Markowski all singled in the inning and Carcioppolo hit her first over-the-fence home run with two outs to push the lead to 14-1.

“It was extremely exciting,” Carcioppolo said. “The whole team showed up to hit today. I am really proud of all my teammates. I have only had inside-the-park home runs before, so today was special. The pitch was right down the middle and it felt great coming off the bat. I knew it would go far but didn’t expect it to be over the fence. I think moving forward I will have more confidence knowing what I am capable of.”

According to her coach, Carcioppolo muscling up for the first time to hit a ball over the fence was the result of hard work and an unusual pregame meal.

“Bella is in the gym for hours after practice is over, before games, and on off days working on her swing,” Bondra said. “Things are coming together for her and it is great to see. I’m sure it has something to do with her pregame meal, and I’m sure you won’t believe this when I say it, but she told me she ate two burgers and pasta before she came to the bus today, and then had a sub sandwich for the bus ride to the game.”

Solon scored another run in the bottom of the second, but Mentor’s lead was too much to overcome.

“Getting out to a big lead was important for us today as this was our first road game,” Bondra said. “Putting your pitcher on the mound up big like that allows them to relax and throw their game in a low-stress situation.”

Leading 14-3 in the fourth, Izzy Coode singled and scored on a Sacks single.

Mentor added four more runs in the top of the fifth.

Julia Maynard, Elise Renko, Place, and Jordan Alesci singled in the inning, and Sofia Kraska had a double.

Carcioppolo finished the game 3-for-5 with two runs scored and three RBI. Temple, Trick, Abby Haydu, Bush, Place, Markowski, and Sacks all had two hits for the Cardinals. Markowski and Place both knocked in three runs.

Maggie Haydu started the game in the circle for the Cardinals. She allowed two earned runs on five hits and struck out one in two innings. Kristin Dems threw one scoreless inning with two strikeouts. Addison Siedler threw 1 1/3 innings. She allowed one earned run on two hits, and Trick sat down the two batters she faced.

“Right now, building our pitching staff is important,” Bondra said. “We had to take a step back and nail down some mechanics the last week and a half, and we have a new game plan as far as pitching goes. We have to get as many of these kids in games now so that they are down the stretch.”

“We have been struggling in recent games but we still have an insane amount of talent on the team,” Carcioppolo said. “I know winning this game will give us a much-needed confidence boost to get us back on track.”

Mentor comes up short against Brunswick