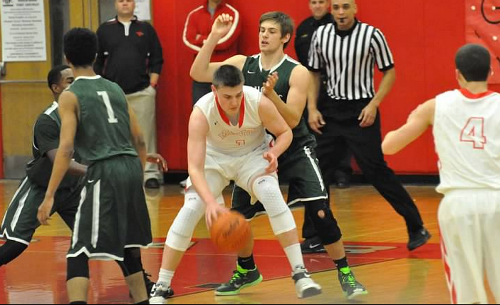 It’s not how you start a game, it’s how you finish.

Mentor didn’t start well on Dec. 27 in the finals of its first Holiday Hoops Tournament against neighborhood rival Lake Catholic, but once the Cardinals got rolling in the second quarter, the Cougars were finished.

Trailing by 10 points after one quarter, Mentor turned things around quickly and impressively in the second and third quarters on the way to a 77-64 victory over Lake Catholic in the championship game of the Mentor Holiday Hoops Tournament.

The Cardinals (5-1) outscored Lake Catholic 55-23 in the two middle quarters to take control of the game. Mentor was led by 6-foot-10 junior Micah Potter with 21 points and eight blocks. Kyle McIntosh added 18 points for the Cardinals and Adam Smith had 15 points off the bench.

“We didn’t attack the press early. We needed spacing. Once we did that, I thought if we could break the press and had numbers and made great passes I had confidence in our players,” Mentor coach Bob Krizancic said.

“We talk about finishing quarters strong and starting the third quarter well and not letting teams back in once we get the lead.”
Lake Catholic raced out to an 18-6 lead in the first quarter behind a huge effort from Justin Robinson and an early hot hand from behind the 3-point arc. The Cougars settled for a 10-point lead at the end of one quarter, but were outscored by 19 in the second as the Cardinals assumed a 39-30 advantage at halftime.

Mentor increased the lead to 64-44 at the end of three quarters.

The Cougars (6-2) were led by Robinson with 27 points. Connor Fitzgerald added 20 points, including five 3-pointers.
Mentor is off to Nashville for three games in three nights from Dec. 29-31. The Cardinals return home to Ohio to play John Hay at Baldwin-Wallace on Jan. 4.

“I really like where we are at 5-1 after losing the Garfield Heights game. To have this record at this time is good,” Krizancic said.

“I think adrenaline will get them going for Monday (Dec. 29) in Nashville. We have been in a situation like this before.”