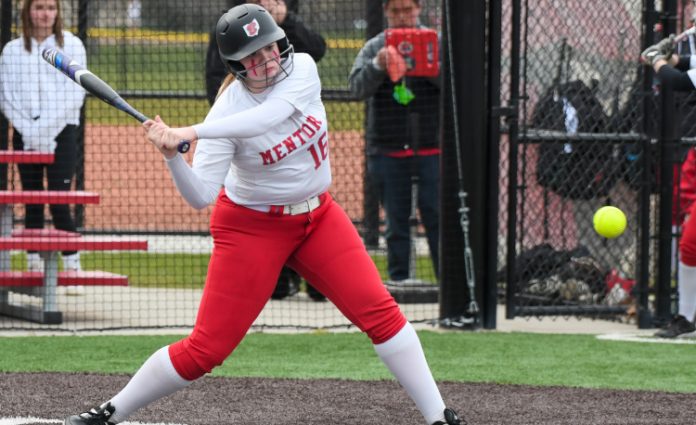 Mentor pounded out 12 hits, including seven for extra bases, and threw a no-hitter in a 12-0 five-inning non-conference win over visiting West Geauga on Friday.

With the win, the Cardinals improved to 10-5 on the year.

“It’s great to go out there in a game that has no pressure and just play,” said Mentor coach Jo Bondra.
The girls had fun and we were able to get everyone in.”

Mentor is in an intense battle to defend the Greater Cleveland Conference title it won last spring.

Getting the chance to step outside of the conference to play a game allowed the Cardinals to relax and simply enjoy playing the game.

That resulted in a solid performance in all aspects.

The Cardinals scored four runs in the first inning, five in the third, and four in the fourth. Meanwhile, Addison Siedler, Leah Temple, and Kristin Dems combined to hold West Geauga hitless with six strikeouts.

“The three pitchers did a great job,” Bondra said. “Addison went two innings and shut them down, and then Leah made her return and shut them down. We have been using Dems as a closer so we threw her in there for the last batter and she one-pitched her to get us out of there.”

Offensively, Maggie Haydu did much of the damage.

She finished the game 2-for-2 with two runs scored and four runs batted in.

“It was really fun,” Haydu said. “I showed up to warmups today with a different mindset. The game is so much easier when I’m relaxed and having fun during the game. I’m super happy with the way I performed today. I’ve been working really hard on my swing and it paid off today. My teammates were energized cheering me on and it felt really good to hit the ball hard.”

Haydu tripled in the first inning and homered in the third.

“The pitch was on the outer half of the plate and I picked it up early,” she said of the homer.
When I hit the ball, my contact felt extremely strong and the rest of my swing felt effortless. I knew it was gone as soon as it left the bat.”

Abby Haydu was 2-for-3 with a triple and two runs scored. Izzy Coode, Temple, Sydni Bush, Siedler, Olivia Sacks, Mak Kobetitsch, and Jenna Place also had hits for the Cardinals. Sacks and Kobetitsch doubled while Siedler and Temple tripled.

“The girls have worked on their offense all season and it continues to be our strength,” Bondra said. “Maggie Haydu hit one out and Leah had an inside-the-park home run.”