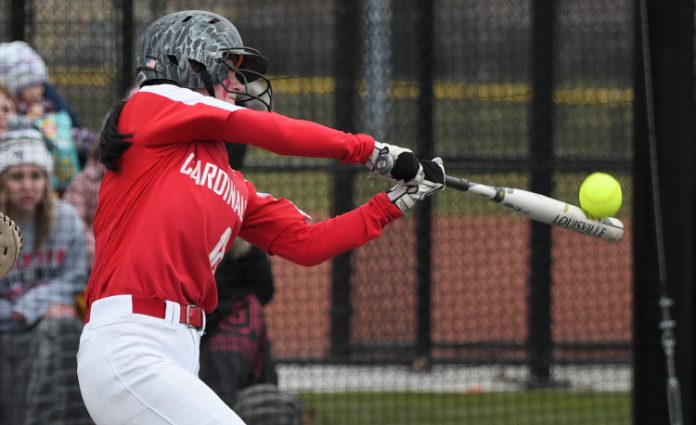 Mother Nature threw the Mentor Cardinals a curveball when their conference game against Medina was canceled due to unplayable field conditions.

The Cardinals scrambled on Wednesday to find an opponent and later that day held off the Columbiana Clippers, 9-7.

“It was nice to win a close game against a quality opponent,” said Mentor coach Jo Bondra.

Columbiana took a 2-0 lead in the top of the first inning on an error and a triple.

Mentor responded with one run in the bottom half of the inning on Sydni Bush’s bases-loaded single but Columbiana added two more in the second on a hit batter, a single, and a fielder’s choice.

The Cardinals tied the game at 3-3 in the bottom of the second.

The Cardinals took the lead for good in the bottom of the third on back-to-back singles by Bush and Maggie Haydu. They added three more runs in the fourth.

Temple and Carcioppolo started that rally with back-to-back singles and Trick walked to load the bases. Bush hit a one-out single to push the lead to 5-3 and Jenna Place hit a two-run single with two outs.

“Our offense continues to be successful,” Bondra said. “We have some underclassmen who continue to step up. Jenna Place had a huge day for us today as well as many other girls. Our offense is coming together more and more each game.”

Trick started in the circle for the Cardinals and threw five innings. Only three of the five runs she allowed on six hits were earned.

“She was successful because she was able to keep the ball low today and we played defense behind her,” Bondra said.

Trick felt relaxed in the circle knowing she had a solid defense behind her.

“Being able to be on the mound felt amazing but the win felt even better, especially since I had a great team to back me up on the field,” she said. “My key to my success in the circle is having faith in my defense and working extra hard during and outside of practice. If I felt I had an off day at practice I would head out to a facility and work on what needed to be worked on.”

Trick finished her day at the plate 1-for-2 with two walks and three runs batted in.

“It was extremely exciting to be able to pull through for my team on the mound and in the box,” she said.

Columbiana pulled to within 7-5 with a two-run fifth but the Cardinals matched that run production in the bottom half of the inning.

Izzy Coode and Temple led off the inning with singles and Carcioppolo hit a sacrifice fly. Temple scored on Trick’s ground out to push the Mentor lead to 8-5.

Maggie Haydu threw a scoreless sixth inning for Mentor. She struck out two of the four batters she faced.

The Clippers scored two runs in the top of the seventh on a walk, a triple, and a single, but Kristin Dems struck out two of the next three Columbiana hitters to earn a save.

“Having that depth in the circle allows us to throw multiple people a game and it throws off the other hitters,” Bondra said.

Temple and Bush both finished the game with three hits for Mentor. Bush and Place both knocked in two runs.

Mentor, who improved to 5-4, hosts North on Friday.