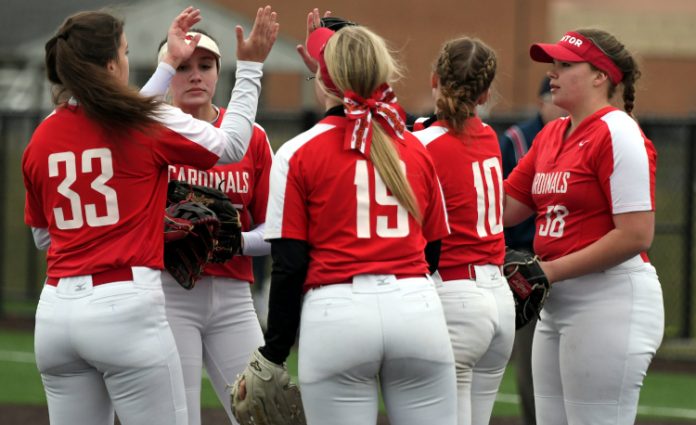 After a big win on Friday night, Mentor traveled to Amherst Steele on Saturday and left with a doubleheader split.

Steele won the first game, 9-5, but the Cardinals rallied for a 10-8 win in the second.

“I think it was huge because our team showed it could lose the first game and then come back and make some adjustments in the second game,” said Mentor coach Jo Bondra. “We used a little bit different of a lineup in the second game so we were able to use some pinch-hitters that are normally starters.”

Mentor opened the first game with two runs in the top of the first inning thanks to Bella Carcioppolo’s solo homer and a Sydni Bush RBI single.

Carcioppolo hit the second pitch she saw over the center-field fence.

“The pitch was right down the middle and felt great off the bat,” Carcioppolo said. “I knew right away that it was gone. I was very excited to start the game with a big hit. I definitely couldn’t have done it without my pregame McDonald’s meal.”

Peyton Trick followed with a double and Bush knocked her in with a clutch two-out single.

The Comets responded with five in the bottom half of the inning.

The Cardinals pulled to within 5-3 in the second but Steele added three runs in the fourth. Both teams scored a run in the fifth and Mentor added one in the seventh.

Bush finished the first game 3-for-4 with three runs batted in. Carcioppolo was 2-for-4 with the homer and a double. She also scored two runs. Leah Temple, Trick, Kiley Markowski, and Olivia Sacks also had hits in the first game.

Maggie Haydu started the game in the circle for the Cardinals. She allowed four earned runs on two hits before giving way to Addison Siedler after just 1/3 of an inning. Siedler allowed just one earned run on three hits and struck out 11 in 5 2/3 innings of work.

“Addison pitched really well,” Bondra said. “She was able to come in the first game and she was able to keep them off balance. She did a really nice job. They have a kid going to Indiana on their team, so she was tough out for us all day, but Addison came in and got her out a couple of times.”

The Comets scored two runs in the bottom of the first inning of the second game but Mentor came back with three runs in the top of the third.

Sofia Kraska hit a leadoff single to start the rally and Jordan Alesci drew a walk. Carcioppolo hit a two-run single to tie the game and Haydu doubled her home to give the Cardinals a 3-2 advantage.

Izzy Coode and Kraska hit back-to-back singles in the fourth to push the Mentor lead to 4-2 but a double and two singles allowed the Comets to tie the game in the bottom half of the inning.

Steele added four runs in the fifth to pull ahead, 8-4.

Mentor began its comeback with two runs in the sixth.

The Cardinals rallied for four runs in the top of the seventh and then held off the Comets in the bottom half of the inning to seal their split.

Jaclyn Parks was hit by a pitch to start the rally and Siedler drew a walk. Paige Davis then doubled home both runners to tie the game and moved to third on Markowski’s sacrifice bunt. Coode reached on a fielder’s choice that left runners at the corners with one out. Bush then singled to load the bases and Abby Haydu hit a pinch-hit double to give the Cardinals a 10-8 lead.

“Abby came through huge for us at the end of the game,” Bondra said.

Peyton Trick started the game in the circle but gave way to Kristin Dems after 4 2/3 innings of work. Trick allowed eight runs on 12 hits and struck out two. Dems pitched 1 1/3 scoreless innings.

Siedler recorded a save by throwing a scoreless seventh inning. She allowed one hit and struck out two.

“We brought Addison back in and we were able to hold them, so that was nice,” Bondra said. “She was essentially a closer after Dems came in to pitch in relief. Dems looked pretty good today pitching and Addison was great to be able to come in from the outfield and keep throwing well to keep their hitters off balance.”

“It feels great to step up and help my team in all possible ways,” Siedler said. “I felt pressured at first but once I stepped onto the mound I knew I would do well and I’m doing this for my team. Mentor softball has been great to me and it’s nice to get the opportunity to pitch and show them what I can do when given the chance.”

Siedler relied on her hook and her defense to keep a good hitting team in check.

“My curveball was really working well for me today. It could have been better but I’m happy with my pitching and I feel good with my performance,” she said. “I got a lot of strikeouts on my curve, as well as my changeup. I had to battle a lot when the count was 3-2 and I was able to hit my spots with my curve and it worked great. When you have a great defense behind you, you don’t have to worry when you’re pitching because you know they got your back.”

Temple led Mentor at the plate in the second game. She was 3-for-5. Carcioppolo and Davis both knocked in two runs and Trick, Davis, and both Haydus hit doubles.

Mentor, who improved to 7-5, travels to Brunswick on Monday.