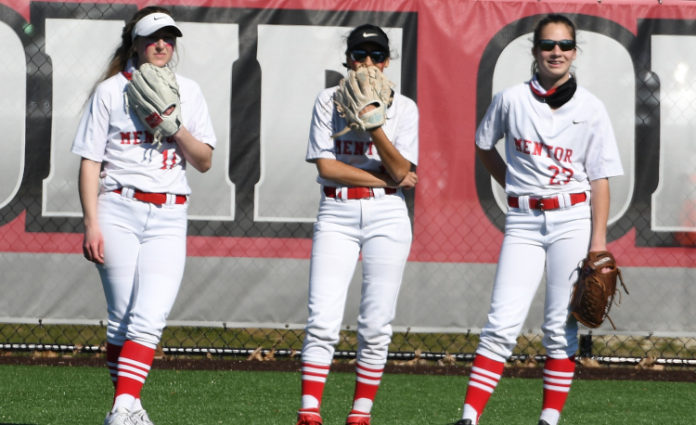 Mentor’s conference game against visiting Medina on Wednesday wasn’t supposed to be played under the lights, but head coach Jo Bondra got creative early in the bottom of the 10th inning to give the Cardinals a chance to win the game at home.

With the score tied at 5-5 after nine innings, the home plate official informed Bondra they’d likely be able to squeeze in one more inning before darkness set in. Three outs later, the umpire was ready to call the game with Kristin Dems ready to step into the batter’s box in the bottom of the 10th.

That’s when Bondra pulled the ace card she had hidden up her sleeve.

“He let them hit and now he was going to make us go finish our inning at Medina,” Bondra said. “That wasn’t right, so I said, ‘I have a dad here with the keys for the lights, so let’s go down there.’”

The umpires and Medina coaches agreed and the game was moved from Mentor’s turf field to its old varsity field under the lights.

“It was probably the most exciting game yet,” Bondra said. “I exhausted every player on the bench. We used pinch hitters and pinch runners. We did everything we had to do to claw that win out. One of the main things we’re trying to teach the girls is everyone has a role. Whether you come in and run bases and you steal or you’re a pinch-hitter, that’s what teamwork is about and we proved that tonight because we used every single person on our bench.”

Bella Carcioppolo doubled and scored on Leah Temple’s groundout in the first inning to give the Cardinals an early 1-0 lead.

Sydni Bush reached on an error in the second and Carcioppolo hit an inside the park home run down the right-field line to make it 3-0.

Medina scored an unearned run in the third and added three runs with two outs in the fifth to take a 4-3 lead.

The Cardinals responded with a pair of runs in the bottom of the fifth to go up 5-4.

Sluga hit a one-out triple and scored on Temple’s base hit. Abby Haydu then singled to put runners at the corners. Bush hit a two-out single to close out the scoring.

That lead held up until the top of the seventh when Medina tied the game with two walks and a pair of singles.

Haydu drew a leadoff walk in the eighth but the Cardinals couldn’t capitalize.

Both teams went in order in the eighth and Sluga turned a rare 8-2 double play in the top of the ninth when she caught a fly ball and gunned down a runner at the plate to end the inning.

“When I saw the ball come off the bat from center I knew it was mine and figured that she would tag up,” Sluga said. “Right away, I got my feet set, was ready to make the throw, and knew that it had to be executed. Sydni also made a great tag at the plate to get us out of the inning.”

A leadoff walk and an error gave Medina a scoring opportunity in the top of the 10th but the Cardinals again threw a runner out at the plate.

“Medina is good,” Bondra said. “I went to watch them a couple of weeks ago, so we knew what to expect. They’re quick and they’re coached exactly like I coach these girls. They’re stealing, they’re bunting, they’re taking extra bases every chance they can, so we knew coming into the game that it was going to be a fight. We prepared all day yesterday at practice, bunt defense, throwing from first to third, just getting ready for everything we thought they’d throw at us. It paid off 10 innings later.”

Medina’s leadoff batter walked and the next batter attempted to sacrifice the runner to second. Instead, Mentor committed an error and the Medina baserunner attempted to score but was thrown out at the plate.

Another error put runners at first and second before Temple recorded her 10th strikeout of the game. Medina then hit a single to load the bases but Temple retired the next batter to end the threat.

“She got better as the game went on,” Bondra said. “She throws better in situations where there’s a little bit more pressure. She came out and gave us a chance to win that game and kind of shut them down when we needed her to. It was another good performance by our pitching.”

After a quick change of locations, Mentor stepped to the plate in the bottom half of the inning.

Addison Siedler drew a one-out walk and Carcioppolo singled to put runners at the corners for Sluga.

“Sluga came up and hit a sacrifice fly to left field and for her, that’s an awesome thing because two innings before she caught a fly ball in center field and gunned the girl out on the tag up at home,” Bondra said. “She was able to save that run for us and then she came up huge for us offensively, so that’s awesome.”

Sluga hit a 3-1 pitch into left field and Siedler did the rest.

“When I got up to the plate with one out and the winning run on third, I knew that I just had to relax, play my game, and put the ball in play,” Sluga said. “I knew I had to wait for my pitch, and when it came I just did what I had to do. Once I hit it to left, I knew Addison would be able to make it no problem.”

Carcioppolo led the Cardinals at the plate as she finished 4-for-6 with a double and a home run and also knocked in a pair of runs. Temple, Haydu, and Bush each finished with two hits for the Cardinals, who improved to 5-0.

Mentor travels to Riverside on Thursday in a matchup of undefeated teams.

Mentor walks-off with win over Medina