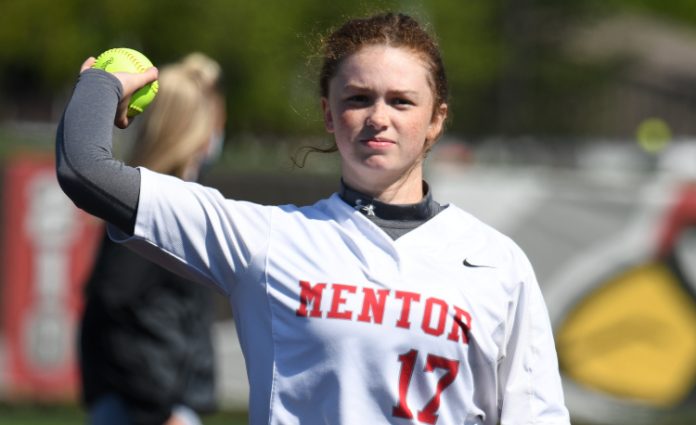 Mentor senior Leah Temple hoped to lock in her college choice prior to the start of her final high school softball season.

With her commitment to Ursuline College on Tuesday, she did just that and now she’s focused on preparing herself to help the Cardinals defend their Greater Cleveland Conference championship.

“It was super important to me to commit before my senior season,” Temple said. “That way, I will be able to improve my skills so I can help my team and get ready for college.”

The reigning GCC Player of the Year sought out a college program that offered her the best of both worlds. She wanted to play for a quality college program at a school with an exceptional academic program.

She found it at Ursuline.

“I wanted to go to a school with a great softball program and a great education program. I needed to be at home there,” she said. “When I stepped on campus, I immediately fell in love with the school. Everything was together and everyone on campus was so nice.”

Temple attended a couple of pitching camps at Ursuline, including one last Sunday.

She developed a strong relationship with the coaching staff and over the weekend she had the opportunity to spend time with several of Ursuline’s current players.

“This time after the camp, coach took me to have dinner with the girls so I could bond with them,” Temple said. “The next day I had my visit and after the tour, I had lunch with the team. They made me feel like part of the team and I loved the atmosphere that came with it.”

As a junior, Temple was 14-4 in the circle with a 1.5 earned run average and 163 strikeouts in 116 innings of work. She also excelled at the plate with a .405 batting average and 0 strikeouts in 82 plate appearances. She finished the season with 21 singles, eight doubles, one triple, and 23 runs batted in.

Ursuline recruited her as a pitcher and she’s eager for the opportunity to compete at the next level.

“When talking with the coaches, she said that they are building a championship squad,” Temple said. “I believe with my talent being able to produce on the mound and in the batter’s box, I feel I will be able to help my college team to a championship.”