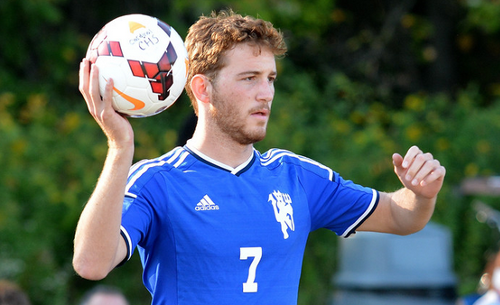 It took Independence some time to score its first goal against a scrappy Brooklyn team on Thursday but once the Blue Devils broke through the goals came in bunches.

“Once we settled the ball and started moving it around the field we found more opportunities to score,” said Independence coach Ryan MacRaild. “The chances came a little easier once we got into our rhythm. By the middle of the second half, we were able to sub out a few seniors and give them the recognition they deserved on Senior Night, while a few others rode it out to preserve the lead.”

Kevin Mewhinney scored three goals to lead the Blue Devils. Wyatt Kunevicius contributed with a pair of goals and Sam Belitz, Christian Seif and Evan Collins all had one. Collins assisted on two goals and Mewhinney, Belitz and Nolan Fields all had one assist.

“After a rough start, we really got it together and got into the rhythm of the game,” MacRaild said. “Brooklyn's record does not show the grit and pressure they play with. They have a few dangerous players that can make you regret your mistakes.”

“They are a solid team with some good skill players and the ability to score from anywhere on the field,” MacRaild said. “It will be a good tune up for playoffs starting on Oct. 19.”