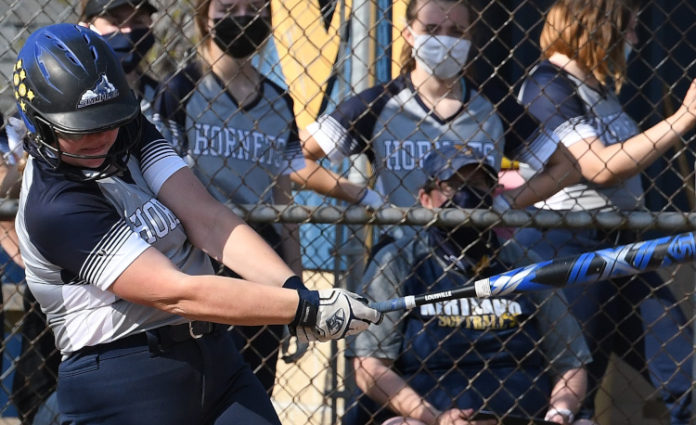 The Hornets led 1-0 when Matijevic launched a towering shot over the fence in center field.

“That hit was huge for me,” Matijevic said. “That was definitely the most important hit I’ve ever had during my softball career. It felt amazing off of the bat and seeing all of the faces of my coaches and teammates when I rounded the bases is a feeling I’ll never forget and only hope to experience again.”

Kirtland and Waterloo were in a pitcher’s duel until the sixth inning when Bella Hostutler tripled to lead off the top of the frame and Matijevic followed with an RBI double.

Until that point, the Hornets had managed just four base runners on two errors, a hit, and a walk.

Waterloo’s Mackensi Kehrer retired the first 10 Hornets she faced, with seven strikeouts, until back-to-back errors broke up her perfect game. She pitched out of that jam and then allowed a leadoff single to Malia Becker in the fifth. Avery Kuczkowski drew a two-out walk but Kehrer struck out the final batter of the inning with runners at first and third.

She allowed just two hits and struck out 11 in her complete-game shutout. Her defense committed just one error, which limited Waterloo’s opportunities.

“The minimal errors was key,” said Kirtland coach Jamie Kamensky. “We did the little things right and with Gianna being on pitching, it all came together today. That was good to see.”

Kirtland’s error came in the sixth inning and it put a Viking on second base with no outs. A groundout moved the runner to third with two outs and Hostutler fielded a ground ball at third and fired the ball to Matijevic, who tagged out the runner trying to score to end the threat.

That play fired up the Kirtland offense.

Stephanie Drazetic drew a leadoff walk in the seventh and Kuczkowski followed with a free pass to put Hornets on first and second. Gianna DiFranco’s single loaded the bases and Hostutler grounded into a fielder’s choice, with the Vikings throwing out the lead runner at the plate.

Matijevic stepped into the batter’s box with one out and clear instructions from her coach.

“I yelled to her that all we need is a fly ball,” Kamensky said.

Matijevic drove the first pitch she saw over the fence.

“The whole game, the only pitches I was seeing were right on the outside corner, and that pitch was no different,” she said. “It was right on the outside edge of the plate. When I stepped up to the plate, I knew that I had to score a runner somehow. My mentality was to simply hit a ball hard enough somewhere so someone was able to score. I was swinging for a single, but I hit the ball just right and I knew it was gone.”

Cantini and the Kirtland defense retired the Vikings in order to close out Kirtland’s win.

Following Tuesday’s 13-5 win over LaBrae in a sectional semifinal, the Hornets have now won back-to-back games for the first time this season and are 9-9 after starting the season 0-4.

“I think everyone becoming more confident has led to the team’s development,” Matijevic said. “Everyone on the team gets along well and does a good job of picking one another up when someone is down, and I think that’s crucial to raising confidence and the success of our last two games. The coaches also do a great job of being positive and making sure that we don’t give up on ourselves no matter what. If we continue to trust each other and pick each other up, only great things can happen from here on out.”

That’s the same message Kamensky has preached since the young Hornets lost their first four games of the season.

“We just kept preaching to our kids that it’s the little things,” Kamensky said. “We made a promise to them at the beginning of the season that where we start is not going to be where we are when we finish and we’re going to be a much better team. The kids just put their heads down and went to work. We all bought in.”

The 18th-seeded Hornets will play No. 2 South Range in a district semifinal at LaBrae High School on May 18.

Hornets light up the course at Riverside