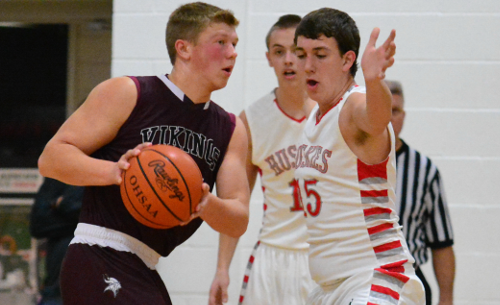 Andrew Miller responded to his first start with a game-high 13 points and eight rebounds to lead Cardinal to a 59-40 win over Newbury on Tuesday. The win snapped a two-game losing streak for the Huskies, who improved to 3-4 on the year.

“He got more minutes, that was the big thing,” said Cardinal coach Jon Cummins. “He did a nice job. He commanded a lot more attention in the middle as far as helping us out defensively. He was just real active on the boards, which was a big thing for us.”

At 6-foot-4, Miller was a force on both ends of the floor.

“He can really stretch the defense too because he can hit some threes as well,” Cummins said. “You get a big guy on him or give him some room out there he’ll hit a three. All it takes is hitting one of those and they have to go out there and play on you now. He did great. He was excited to play. He told me he really looked forward to the opportunity and he made the best of it.”

The rest of the Huskies responded.

Eight different players scored in the first quarter as Cardinal built a 22-3 lead.

“I was able to get a lot of guys in the game,” Cummins said. “I threw them all in there because I want to get these kids experience in meaningful minutes. I can put all of them in the fourth quarter but that’s really not going to help my team out when the other team isn’t giving much effort.”

Craig Kaser scored 12 points for Cardinal and Jake Francis contributed with 10. Six other players pitched in with at least two points in the game.

“We were able to contest every shot,” Cummins said. “That was the big thing, playing good defense. We mixed it up from running some of our zone presses to running man-to-man and then in half court we mixed it up too going from man to our 2-3 zone. We pressured a lot more. I made a point of telling the kids to contest everything. A team that’s not the most skilled team, if you give them some hope they’ll stay in the game. I wanted to go out and really attack them in the first quarter.”

Cardinal led 33-14 at halftime and 49-25 after three quarters, which allowed Cummins to empty his bench.

“In the fourth quarter I was able to get in all four freshmen and a sophomore to play the last few minutes of the game,” Cummins said. “That will definitely help in the future. They definitely were nervous but that’s what I’m trying to get out of these kids is the nerves, so they go out and play basketball.”

With six days until their next game, the win gave the Huskies some much needed momentum heading into the heart of their schedule.

“It was huge,” Cummins said. “That’s one thing going into this game, we needed a victory no matter who it was against. We had two tough losses where we had the lead going into the fourth quarter in both games, so we needed to come out and play well. We were able to do that tonight. It was just a good team effort. Everyone contributed and I thought they all played hard and they played well and they hustled.”