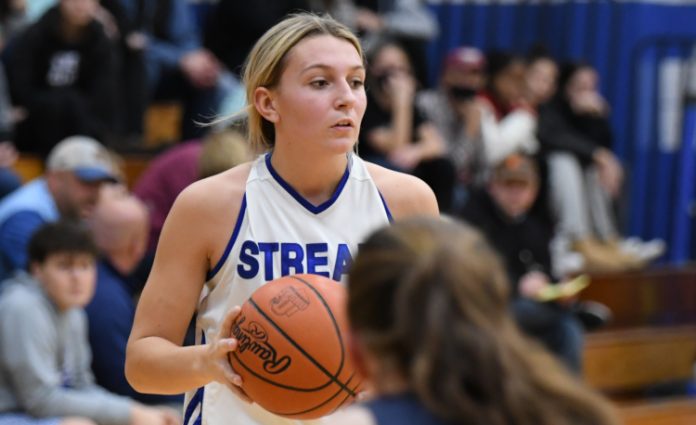 “It was a great feeling, especially being able to do it on my home court with my family and friends,” Montagner said. “It made it even better.”

Montagner, who matched Elizabeth Bottar with a team-high 11 points, hit 1,000 with a first-quarter free throw.

“I went in for a layup and got the foul,” she said. “I made the first foul shot which was my 1000th point. Coach called a time out and the game stopped. We all huddled up for a few quick pics then the game went on.”

Madison led the Falcons after the first quarter, 14-13, and then dominated the began to pull away in the second quarter.

The Blue Streaks led at halftime, 28-22, then outscored Jefferson in the third quarter, 17-2.

“It’s always good to bounce back with a win after a tough loss,” Montagner said. “Getting a team win was just as exciting as my accomplishment. Whenever we move the ball good things happen.”

All 10 Blue Streaks who saw action scored in the game.

“When everyone’s involved and we make the extra pass to find the open girl, the scoring comes easy and the offenses are run more efficiently, which then motivates us on defense,” Montagner said.

With the win, the Blue Streaks improved to 2-2 overall. Madison travels to Chardon on Wednesday.