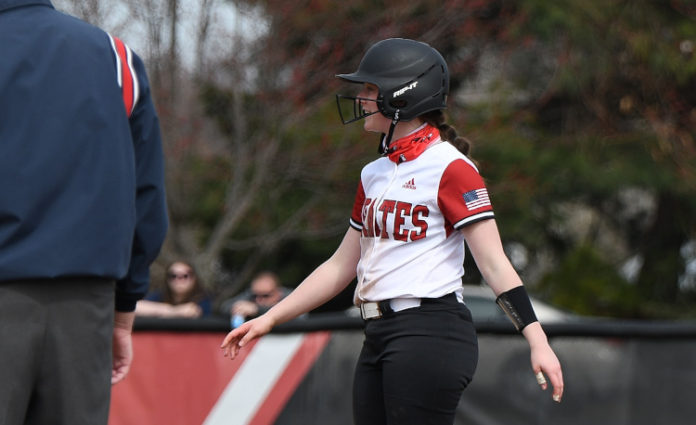 Senior Sydney Moon returned to the Perry lineup and the Pirates responded with a dominating 17-1 win over visiting Edgewood in a key conference game on Wednesday.

Moon was 2-for-2 at the plate with a double, a home run, and she knocked in five runs, but her mere presence affected the team to an even greater degree in a bounce-back win following a 5-1 loss to South on Tuesday.

“Today was the first time we had our starting lineup intact and it paid off in a big way being driven by our seniors Elle Infalvi, who went back behind the dish today, and Sydney Moon in her first game back (from injury),” said Perry coach Joe Medlen. “Yesterday’s loss helped us prepare big time as facing pitchers like South’s Emily Kelly makes us better in the long run. We literally had a really bad inning yesterday and take that away and that game could go any way. I’m proud of how we approach the out-of-conference games now knowing and understanding the why in those games.”

Edgewood opened the game with a leadoff double by Clair Randolph. A two-out error and back-to-back walks gave the Warriors a 1-0 advantage.

It was all Perry after that.

The Pirates scored four runs in the bottom of the first, four more in the second, and they invoked the run-rule with a nine-run fourth inning.

Emma Pietrzak, Lilly Agostine, and Rileigh Liddy each had RBI singles in the first.

Moon hit a two-RBI double with one down in the second to spark that rally.

“It was exciting to be back and playing with my teammates again,” Moon said. “I have taken the same approach that I have had all season, and it is to look for good pitches and make good contact. I was looking for pitches that I could drive to ensure I had a productive at-bat.”

Agostine’s two-run homer in the second gave the Pirates an 8-1 lead.

The Pirates batted through the order in the fourth.

Moon drew a one-out walk to start the rally and Pietrzak singled. Agostine walked to load the bases and Gigi Vicini singled to make it 9-1. Liddy drew a bases-loaded walk and Calli Thompson reached safely on an infield grounder as the Warriors attempted to throw out the lead runner at the plate. Instead, Perry grew its lead to 11-1.

Moon closed out the scoring with a three-run homer.

“I took the first strike and then I saw it right down the middle and I got the barrel on the ball,” Moon said. “It felt good as soon as it left the bat. It felt great, but I wasn’t the only one to produce in the lineup today. There were a number of us that had a hand full of hits today, including Lilly’s bomb.”

Moon, Pietrzak, Agostine, and Emma Webb each recorded two hits in the win. Moon led the team with five RBI and Agostine knocked in three runs. Webb hit a triple in the game.

Hartman picked up the pitching victory for the Pirates after allowing just one unearned run on five hits and she fanned five batters.

With the win, Perry improved to 6-3 overall and 3-0 in league play.

“I say it a lot, but it’s a marathon, not a sprint,” Medlen said. “Our goals are playoffs 100-percent. If we win a league title on the way, great, but playoffs will always be our grand focus throughout the regular season. We’re all back, so let’s see how things go now.”