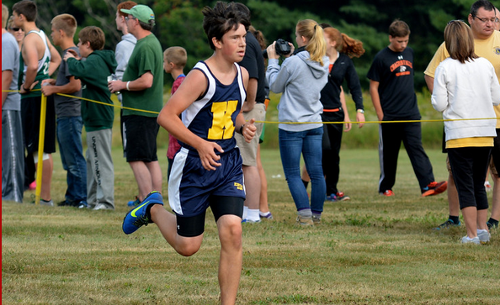 A hard week of practice paid off for the Kirtland cross country team as several runners finished with season or lifetime personal best times at Boardman High School’s Spartan Invitational on Saturday.

“I was really proud of the freshmen for getting their season PRs,” said Kirtland coach JP Moran. “They’re just learning each week and coming along nice and doing a good job there. That was good to see. They’ll be our future.”

“It was pretty similar on both sides,” Moran said. “The times could have been a little faster after Madison’s U Wanna Come Back meet. We had some pretty good times there and I was hoping for it. We worked hard last week and this week we have a meet on Tuesday and Saturday so really, the meets are the workouts this week.”

Senior Christine Walsh led the girls’ team with a time of 22:54, good for 47th place. She missed out on one of the Nike gear bag awards by one place.

“A girl got her by just a couple of seconds,” Moran said. “She just missed it.”

Freshman Ellie David and sophomore Sabrina Rahz also competed for the Hornets in the girls’ race.

“Ellie David didn’t get her season PR but she’s been doing really well for us as a freshman,” Moran said. “She was only 10 seconds off her lifetime PR, so she was running pretty good.”

Kirtland will travel to Grand Valley on Tuesday then compete in the Cardinal Invitational on Saturday.