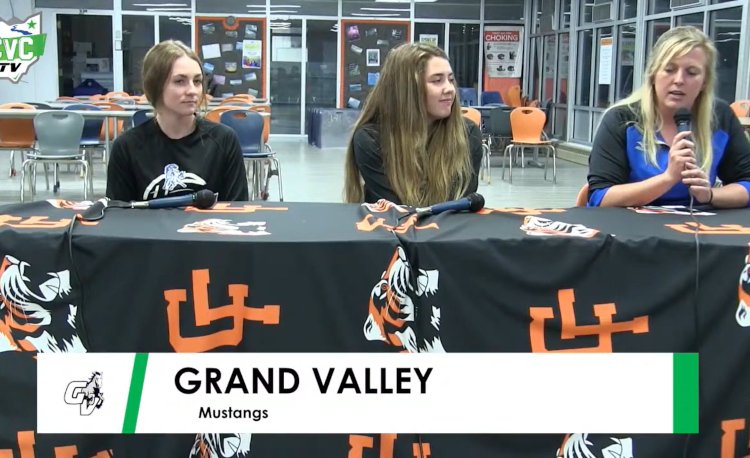 “Our team has strong potential coming into this season,” Smolinski said. “They have been putting in the hours during the preseason to overcome any odds.”

To reach their potential this season, the Mustangs must come together early and play consistently as a team throughout the season.

“To be successful, the team has to play with one heartbeat and play each set point by point,” Smolinski said. “(They have) to get more comfortable with each other to get that trust factor.”

“Court is one of the year’s team-picked captains. She is a very driven player with great leadership and that high-pressure experience,” Smolinski said. “(Guzell is) that player that every coach wants, always in the right spot at the right time, making big plays. Taryn has the ‘yes coach’ mentality.”

“Makayla plays smart on the court and sees the floor well. Makayla doesn’t play as if she is only a sophomore,” Smolinski said. “(Hart), having started as a freshman, has deepened her net awareness and heightened the speed of the game. Dixie is stepping up to the plate this season, filling in a key role for us and giving us a height advantage upfront.”

“Abby is the other team-picked captain. Abby will be making big plays for us this season if this preseason is any indication. I wish I had the ability to coach her from her freshman year,” Smolinski said. “Rhy has really flourished for this preseason and has found her niche in the team.”

Smolinski also is counting on junior right side Maggie McGovern and sophomore defensive specialist Hailey Burn to contribute this season.

“Maggie keeps the positive vibes rolling on the floor, which is a crucial asset in tough moments. She’s the player where I can put anywhere with confidence,” Smolinski said. “(Burn) may not be the tallest on the floor, but she doesn’t play small.”

Smolinski and the Mustangs certainly have the talent to improve upon last season’s record. While experience is in short supply, Smolinski will focus on minimizing her squad’s weaknesses while maximizing the strengths.

“We plan to do so by putting the girls in the position where they will see the most success and continue to work on the things where we struggle,” Smolinski said. “The goal is to make every player well-rounded across the floor. That, as a team, we feel will get us the greatest success.”