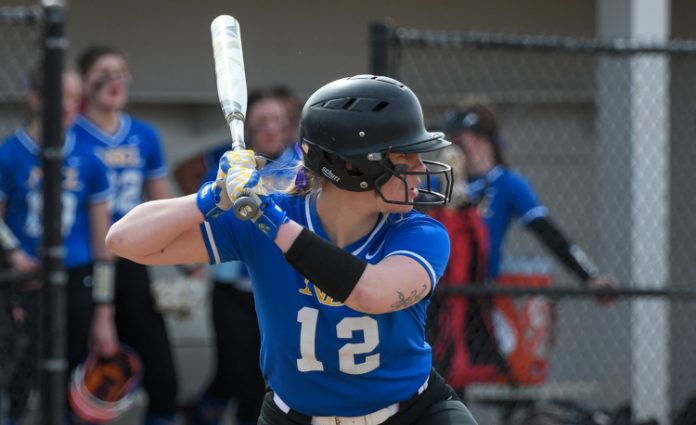 Notre Dame-Cathedral Latin pulled off a bit of an upset with a nine-inning win over host Lakeview in a Division II sectional semifinal on Tuesday.

The 13th-seeded Lions scored a run in the top of the ninth and then held off the 9th-seeded Bulldogs in the bottom half of the inning to seal their win.

“You can’t script it any better,” said NDCL coach Tiger Alexander. “That’s what we always talk about, the best team doesn’t always win. Sometimes it’s the team that executes the best and we had a great, great defense. There were plays that we made when they had the winning run at third base twice and the winning run at second base with less than two outs and outfielder Celia Anthony or Jeanna Sukey made plays.”

Sukey singled and scored on Madi Dutton’s RBI double in the top of the first to give the Lions an early 1-0 lead.

That lead didn’t last long as the Bulldogs hit a double and scored on a passed ball in the bottom half of the first.

The Lions manufactured a run in the fourth when Ava Morano led off with a single and Ava Baeslach drew a one-out walk. Morano then moved to third on a passed ball and scored on Giana Messina’s sacrifice bunt.

A walk and an error allowed the Bulldogs to score three runs in the bottom half of the inning to take a 4-2 lead into the fifth.

NDCL cut its deficit to 4-3 after Sukey drew a one-out walk, stole second, and the scored on an error.

The Lions scored two runs in the sixth on a Morano double and a Baeslach single, but again, the Bulldogs responded with a run in the bottom of the sixth to send the game into the seventh tied up at 5-5.

Anthony singled to start the NDCL seventh and Sukey was hit by a pitch but the Lions couldn’t push across the go-ahead run.

Lakeview had its chance to end the game in regulation with a single and a walk but two flyouts ended that threat.

The Bulldogs had two runners on in the eighth but again NDCL’s defense held.

Messina hit a one-out single in the top of the ninth and moved to second on Anthony’s bunt single and to third on a passed ball. She scored the winning run on a passed ball with two outs in the inning.

“Going on another team’s turf and competing until the very last inning always shows what a team is made of,” Messina said. “There were multiple times when we could have fallen under pressure and folded but we all trusted that everyone wanted it as much as the girl next to her. The conjoined effort made this win exciting and heartfelt for everyone included.”

Messina finished the game 1-for-3 with a run scored and an RBI.

Her bunt single set the stage for the dramatic win.

“My approach for my ninth-inning at-bat was to get on by any means necessary,” she said. “Knowing the situation, it was pivotal to get a baserunner on, and being successful in that position is what we work for. Whether getting on by a hit by pitch, home run, walk, or bunt, I was glad to do my part and start off the inning.”

Once she reached base, Messina knew she had to be aggressive to put the Lions in a position to score the go-ahead run.

“My mentality was to attack every situation that allowed me to advance and to encourage my teammates up to bat,” she said. “Risks come with rewards but in a tight situation, you also have to play strategically and be aware. Being able to give back to my teammates and all their efforts by being the go-ahead run is more than I could have wished for and I’m proud of everyone’s contributions.”

Morano and Anthony both finished with two hits and Baeslach knocked in a team-best two runs.

Dutton, who doubled in the game, went the distance in the circle. She allowed one earned run on nine hits and struck out four.

“I was overjoyed that we got the win,” Dutton said. “We had a slow start hitting but picked it up towards the end of the game. I knew we were not going to stop fighting for this game. My mindset the last inning was to trust my defense; they have already shown me that they have my back. I told myself to keep my arm speed up and made sure I pounded the corners not giving them anything to hit.”

NDCL was well prepared for the Bulldogs thanks to the efforts of its coaching staff.

“I tip my hat to my assistant coaches,” Alexander said. “(Maria) Dutton, (Kaitlynn) Boykin, and (Michael) Rowan did a very solid job of scouting. That puts us in a better position when we face different teams and we were able to scratch and claw out a win.”

The Lions advanced to play at No. 10 Alliance on Thursday.