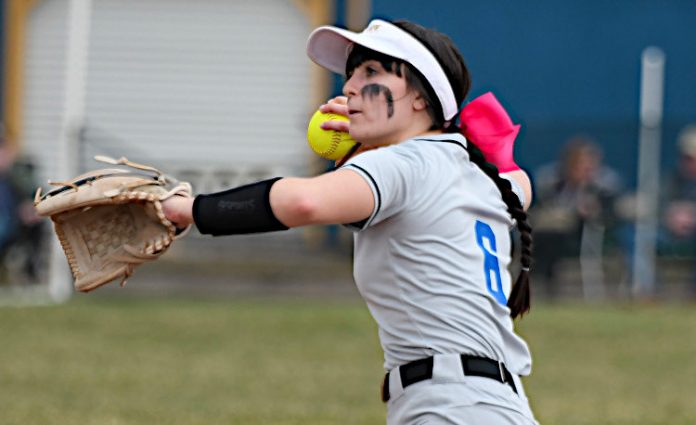 Notre Dame-Cathedral Latin scored three runs in the top of the ninth inning and then held off Mentor in the bottom half of the inning to record a 12-9 non-conference win on Saturday.

With the victory, the Lions improved to 2-0 on the season.

“You can’t script this stuff up any better,” said NDCL coach Tiger Alexander. “That’s resiliency. We’re away, playing in a ‘hostile environment’ with a lot of people out. We just had a lot of resiliency and were very loose. We didn’t let the game get bigger than what it was.”

The Lions took an early 1-0 lead in the top of the first inning when Jeanna Sukey and Lexi Simon hit back-to-back singles to start the game. Madi Dutton then grounded out to score Sukey.

Sukey then hit a one-out single in the top of the third and scored on an error to make it 2-0.

Mentor responded with a three-run third to take a 3-2 lead.

Leah Temple and Bella Carcioppolo both reached on errors with one out and Temple scored on Sydni Bush’s sacrifice fly. Carcioppolo tied the game when she scored on Abby Haydu’s single. Haydu scored on her sister Maggie’s two-out single.

The Lions evened up the game at 3-3 in the top of the fifth.

Sukey, who finished the game 4-for-5 with three runs scored, opened the frame with a single and stole second. Simon then drew a walk. Sophia Rowan followed with a two-out double and Ava Baeslach walked to load the bases. Ava Morano drew a bases-loaded walk to force home a run.

The Cardinals regained the lead in the bottom half of the inning.

Carcioppolo started the rally with a triple and she scored on Bush’s sacrifice bunt. Abby Haydu then doubled and scored on an error to give Mentor a 5-3 lead. Izzy Coode then drew a walk and Kiley Markowski grounded out, but picked up an RBI when Maggie Haydu scored after reaching on the error earlier in the inning.

NDCL blew the game open with a five-run sixth.

Alex Tanner doubled to start the inning and moved to third on Celia Anthony’s bunt single. Sukey walked to load the bases. Tanner then scored on a groundout and Dutton reached on an error that allowed Anthony to score. Sukey would score on a passed ball and then Rowan drew a walk. Morano delivered a two-run single with two outs to give the Lions an 8-6 lead.

“I was talking to (Mentor coach Jo Bondra) back and forth between innings,” Alexander said. “It was a fun game. A break here, a break there, it could have gone either way. Hats off to her and her coaching staff.”

The lead didn’t last long as Mentor scored two runs in the bottom half of the inning.

Kristin Dems, who entered the game to pitch in the previous inning, hit a one-out double and scored on Bush’s two-out single. Abby Haydu then tripled home Bush to tie the game.

Both teams scored a run in the seventh to force the extra innings.

Tanner led off the NDCL seventh with a double and scored on an error.

Mentor manufactured a run in the bottom half of the inning when Markowski hit a one-out single and moved to second on an error. Jordan Alesci then singled and Temple hit a sacrifice fly to tie the game.

After a scoreless eighth, NDCL posted three runs in the top of the ninth and held off the Cardinals in the bottom half of the inning.

Once again, Sukey kicked off the rally with a single but was caught trying to steal second. Simon then drew a one-out walk and Dutton singled. Rowan drew a walk to load the bases and Baeslach hit a two-run single. Giana Messina drew a walk to reload the bases and Tanner picked up an RBI the easy way when she walked on six pitches to close out the scoring.

Back-to-back errors put two Cardinals on base in the bottom half of the inning but Dutton struck out the next two Cardinals and a fly-out ended the game.

“There is a lot of cross-connection between the girls on both teams playing in the summer leagues,” Alexander said. “To walk away from that with a ‘W’ really will help this young team.”

Sukey led the Lions with four hits. Rowan recorded two and Simon, Dutton, Baeslach, Morano, Messina, and Tanner each finished with one.

Dutton earned the pitching victory but it didn’t come easily. She allowed five runs on 13 hits and struck out seven in 8 1/3 innings of work. Rachel Debevec allowed three earned runs on four hits in 2/3 innings.

“I always tell our kids and our parents that we’re like a rock band,” Alexander said. “We’ve got a lead singer, Madi is our pitcher, but it takes the drummer, the person on the trumpet, and it takes a whole ensemble cast to really put the pieces together. A game like today that was back and forth, it really resonates the fact that we’re jelling.”

Maggie Haydu was 4-for-5 for Mentor. Temple, Carcioppolo, and Abby Haydu each recorded three hits, and Bush led the Cardinals with three runs batted in.

Temple took the pitching loss. She allowed just five earned runs on 12 hits and struck out four in 8 1/3 innings. Dems and Maggie Haydu each pitched 1/3 of an inning. Haydu struck out the only batter she faced.