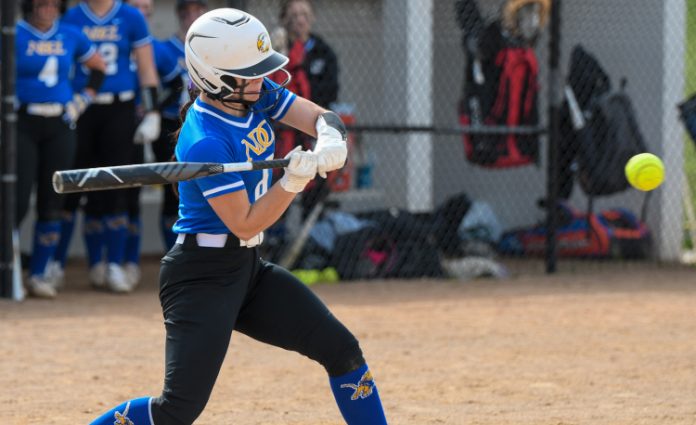 CHARDON—Notre Dame-Cathedral Latin honored its seniors with a doubleheader sweep of visiting Beaumont on Saturday.

The Lions pounded out 15 hits, including five for extra bases, in a 21-1 three-inning win in the opener and then used an 11-run inning to beat the Blue Streaks in the second game, 15-5 in five innings.

“All five of our seniors have helped rebuild our program to a competitive level,” said NDCL coach Tiger Alexander. “They are not only athletically impactful but extremely successful academically. I’m extremely proud of them all and their respective parents and the NDCL family.”

Mallory Sah was 1-for-4 with two runs scored and an RBI. Kayleigh Collins was 0-for-2.

“Mallory Sah is a four-year player in our program who has provided energy to JV and varsity teams over the past four years. She consistently has kept the team energized,” Alexander said. “Kayleigh Collins has a tremendous work ethic and wants to compete.”

Rachael Debevec scored two runs and started the second game in the circle. She struck out one in two innings.

“When presented with opportunities to work as a middle reliever for our pitching staff, Rachael has effectively navigated with positive outcomes,” Alexander said. “We as a program appreciate her efforts.”

Jeanna Sukey and Madi Dutton both turned in outstanding performances in their senior day games.

“Jeanna Sukey, a future collegiate outfielder has adapted to second base duties and made momentum alternating plays for our defense. Her speed on the bases and ability to hit for power is game-changing,” Alexander said. “Maddi Dutton’s impact in the circle has elevated our ability to compete at a high level in and out of the district. She has been one of the most consistent hitters in the district hitting for power and average.”

Sukey ignited the Lions from her leadoff spot in both games.

“It was so much to spend Senior Day like that,” she said. “The energy in the dugout was amazing. We were loose and playing the game we all love. Today truly reminded me of all the fun and excitement softball has given my life. Not to mention, I was able to do that with 12 of my best friends. I couldn’t have asked for a better day to be remembered as a senior in this wonderful program.”

All five seniors have helped to restore the success the Lions have enjoyed over the years.

“The seniors have such a big impact on the energy and the success of this team,” Sukey said. “The five of us have a lot of experience and a lot of energy that helps this team stay focused and calm and also ready to play. We can’t do it without the rest of the team though. Next year, they will have to fill the roles we leave behind, but I have no doubt in my mind that they can do it.”

“At the plate, I just kept it simple,” she said. “I said see it, drive it. The pitching today was slower, which is always difficult for me but keeping it simple and focusing on hitting line drives really helped me succeed today.”

NDCL’s underclassmen did their best to send their seniors off with a successful day.

Lexi Simon was 6-for-6 with a double, three runs scored, and four RBI. Sophia Rowan finished the day 5-for-7 with two triples, a home run, six runs scored, and five RBI. Ava Morano had four hits, including two doubles, and six RBI, and Lucy Joyce and Alex Tanner both contributed with three hits.

With the wins, NDCL improved to 7-2 on the year. The Lions host Walsh Jesuit on Wednesday.