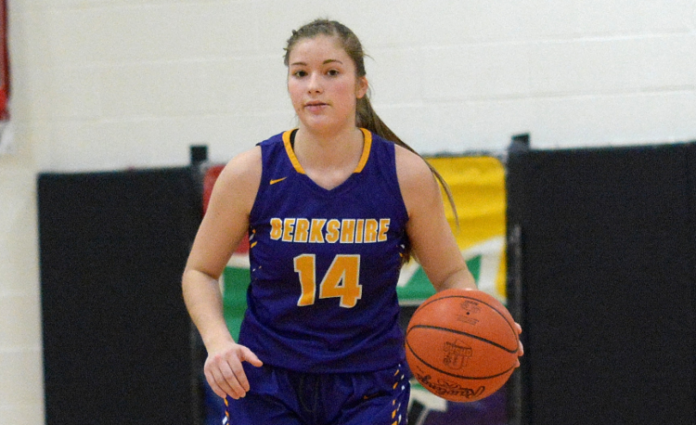 First-year Berkshire coach James Bosley only has one returning starter and two others with varsity experience at his disposal, but the former Chalker assistant is encouraged by what he has seen out of the Badgers thus far in the preseason.

“The first thing I have seen with these girls is how willing they are to learn a new system and just work hard and compete every day,” Bosley said. “They show up every day with positive attitudes and a lot of enthusiasm. The sky is the limit as far as the potential we have for this season. This team has a couple of girls with varsity experience and some younger girls that are eager to contribute.”

Bosley quickly recognized how quick the Badgers are and he hopes to use that to his advantage this winter by speeding up the pace of the game.

While he does expect some growing pains as the Badgers develop into a varsity squad, he’s also excited to watch as the team grows throughout the year.

“Most of the challenges are going to be on me as a first-year head coach, but these girls have made it an easy transition because they are so coachable,” Bosley said. “That is a testament to prior coaching, their parents, and this community. The youth of the team could be a challenge early, but I think they are going to adapt and grow up rather early within the system.”

Senior Madison Chapman is the only returning starter.

“Madison has been great,” Bosley said. “She is a natural leader. She has a great understanding of the game and is always looking to encourage and help her teammates.”

“Lexi is a game-changer on the court,” Bosley said. “She is a hard worker and one of the most competitive girls that I have ever coached.”

Lillibridge, a guard/forward, provides the Badgers with leadership and is among Berkshire’s most talented defenders.

“Grace is quietly one of the leaders of the team, I’m not sure if she even knows that or not,” Bosley said. “She is always giving 100-percent and it makes her one of, if not our best, defensive players.”

The Badgers will get a boost from the return of senior guard/forward Shaelin DeLong, who missed last season with an injury.

“Shae is one of those players that fifth and sixth graders dream of being when they are in high school,” Bosley said. “You can see she has such a passion for the game of basketball. She missed last year due to an ACL injury, and you can just tell how happy she is to be back playing.”

Junior forward Alyssa Schafer is expected to round out the starting lineup.

“Alyssa is becoming a complete post player,” Bosley said. “She can stretch the floor with her ability to shoot the ball and has great footwork that helps create shots inside.”

Dingman is a forward who can stretch defenses with her ability to shoot the ball. Chapman is a guard/forward and Czekaj is a guard.

“(Kayla) is good at positioning and it makes her one of our stronger rebounders,” Bosley said. “Mollee, just like her sister Madison, is a natural leader. You can just tell they have the mindset to always give their best. Mollee is a very active defender and with her speed and length, she is going to really frustrate the other teams. Courtney has a basketball mind. She is always thinking two or three steps ahead. She, like many of the other girls, has really bought into how we want to play defense this year, and it has helped her on the offensive side.”

Morton, Kastor and Lillibridge will gain valuable experience this season as they help to build Berkshire’s future.

“Elsa is the kind of player you love to have on your team. She is coachable, a team player and is always trying to get better. She is going to always find a way to contribute in some way to help the team,” Bosley said. “Lydia has a bright future on the basketball court. She has put a lot of time into her game. She has a high basketball IQ and it’s going to help her adjust to how much faster the game is at the varsity level. Georgia is another young player that is going to have to adjust to the speed. She is athletic, quick, and competitive, all of which help make up for her youth. She is only going to get better as the season goes on and she gains more confidence.”

Despite their relative youth, the Badgers have their sights set on winning the Chagrin Valley Conference Valley Division title. That could lead to a deep run in the playoffs.

“We want to win the CVC. If we can do that, we put ourselves in a good position to have success in the postseason,” Bosley said. “For us to win games this year, it is going to happen with a defense-first mindset. We are going to look to play hardnosed defense and push the pace on the offensive side.”