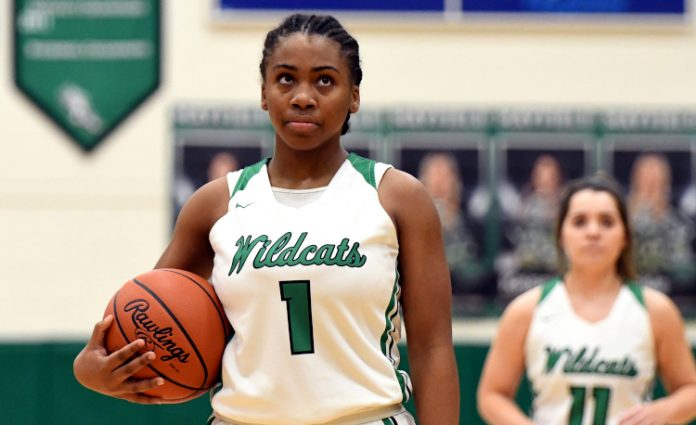 Harris is new to Mayfield but he knows the Western Reserve Conference and he’s eager to see what his new squad can do this season.

“I think we have the potential to be a very good basketball team,” he said. “We have some good size, guard play, and have good athleticism.”

The Wildcats, who finished the 2020-21 season with an 11-11 record overall and a 2-4 mark in league play, return three starters and four others with varsity experience.

“Hannah has a high motor on the defensive end of the floor,” Harris said. “Her length and athleticism can alter a lot of shots in and around the rim. She runs the floor well and rebounds with authority.”

Jennings, a 5-foot-8 guard who holds a scholarship offer from the University of Arkansas at Pine Bluff, averaged 10.7 points, 5.5 rebounds, 1.8 assists, and 2.2 steals per game last season. She also earned All-WRC honors.

“Uriah is a dynamic player with the ball who can score in a variety of ways,” Harris said. “She’s tremendous defensively both on and off the ball and can impact the game on both ends of the floor.”

“Alex is shifty with the ball in the open court,” Harris said. “She sees the floor well and is a willing distributor of the basketball. She can defend the ball well and is continuing to improve in a variety of facets of her game.”

Sophomores Gabby Moore and Nav Buttar are expected to round out the starting lineup.

Moore is a 5-foot-6 guard who averaged 2.5 points and 1.1 rebounds per game last season and Buttar is a 5-foot-9 forward.

“Gabby is one of the better shooters in our program. She’s worked very hard this offseason to continue to develop all facets of her game. She is a hardnosed player who plays with emotion,” Harris said. “Nav has a nice combination of height and athleticism that will help her grow into a very good high school player. She shoots it well and is disruptive defensively.”

Two seniors, two juniors, a sophomore, and a freshman will provide the Wildcats with depth.

Senior Sincere Lucas is a 5-foot-10 post while classmate Grace Moran is a 5-foot-4 guard.

“Sincere is a strong post presence. When the ball gets into her hands, no one is taking it away from her,” Harris said. “Grace has a good sense on the floor and provides some needed shooting ability to our program.”

The juniors are Taylor Sovchen, a 5-foot-9 forward, and Lauren Schmidt. Cori Marsalis is a 5-foot-4 sophomore guard.

“Taylor has some nice length and a good shooting touch from beyond the arc,” Harris said. “Cori fits the mold of what we look for in a guard. She plays hard, shoots it well, is a good defender, and plays with an edge. I’m really excited about Cori and her potential.”

The freshmen are Olivia Williams, a 5-foot-3 guard, and Jenna D’Angelo.

“Liv is young but has tools to be successful,” Harris said. “She is a smart player who is very coachable. She works hard at her craft and is very smooth with the basketball.”

Harris has been pleased with what he has seen out of his new team in the preseason but he knows the WRC schedule is a grind and the Wildcats will have to consistently play hard, rebound, and protect the ball, and hit timely shots.

“Our goal is to continue to work hard every day to grow and reach our fullest potential,” he said. “We have the ability to win some games and compete with the top teams in our league, but it’ll take time and effort to grow and develop into the style and type of players we as a coaching staff want them to be.”