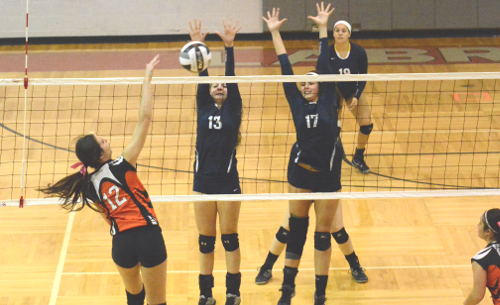 LEAVITTSBURG— No. 4 Newton Falls rallied for wins in the final two games to defeat No. 7 Kirtland, 3-2, in Monday’s Division III sectional semifinal at LaBrae.

“The girls showed a lot of heart and a lot of passion throughout the five games,” said Kirtland’s Bob Schenosky, who guided the Hornets to a 7-11 mark in his first year as head coach. “I couldn’t ask for anymore effort from any of them. They did a terrific job. Everybody hustled and hit the floor for everything.”

Everything was going well for the Hornets in the third game but Newton Falls slowly stole the momentum in the fourth set and finished off the match with its powerful hitting and defense.

“I thought we had the momentum going into the fourth game,” Schenosky said. “Newton Falls did a terrific job. They had a nice hitter and they scrambled for a lot of balls on us in game four. The ball went back and forth and unfortunately it didn’t bounce our way in the last game.”

The Hornets played without standout Taylor Frazee, who sprained her ankle a week earlier. Senior Sarah Steigerwald also was hampered with an injury.

“It was tough,” Schenosky said. “Taylor became a very important part of our back row and Sarah has been nursing an ankle, but you’ll never see that out of her. She did a great job. Everybody else with their injuries they all stepped up and did a great job. We lost to a good team.”

The Hornets finished the year tied for second place in the Chagrin Valley Conference Valley Division with a 5-3 record.