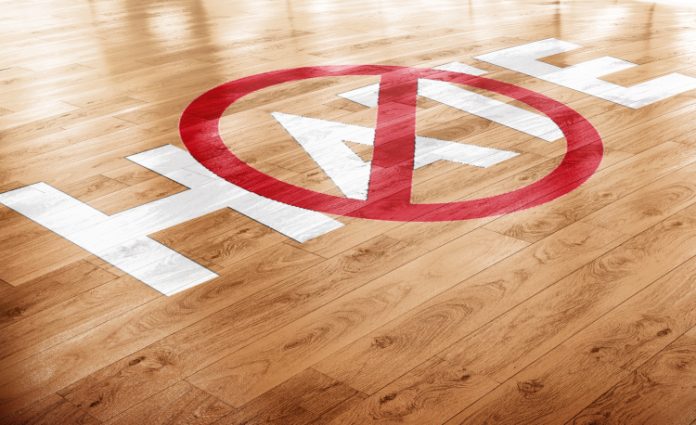 The Badgers overcame an early 15-1 deficit and even rallied back from a five-point deficit in the fourth quarter to beat the Hornets, 46-39. The last time Berkshire ended up on the right side of the scoreboard in a game against Kirtland was back on Jan. 28, 2012.

What should have been an exciting moment for the Badgers instead is going to be remembered by what happened in the Berkshire student section during that contest.

Throughout the game, members of the student section verbally attacked a Kirtland player by hurling homophobic slurs at her.

Unfortunately, this isn’t the first incidence of a hateful attack on a high school athlete I have witnessed or learned of.

In over 20 years on the sidelines, I’ve heard it all.

For the most part, as despicable as the comments are, I always try to remember that we’re dealing with high school students. I was an immature teenager and made many regretful mistakes during my high school years.

But, that lack of maturity doesn’t absolve the perpetrator of wrongdoing.

We’re living in unprecedented times as many marginalized groups continue to fight for equality while the other side has dug in even further, and the divide between the groups continues to grow.

Yet, that’s no excuse for tolerating this type of behavior.

After being notified of what was taking place, Berkshire athletic director Brian Hiscox repositioned the school’s resource officer adjacent to the student section with 2 minutes, 21 seconds left in the third quarter. According to witnesses, that slowed but didn’t stop the attack.

The issue was reported to the Berkshire School District superintendent, John Stoddard, who conferred with Mr. Hiscox on the matter.

“The students involved did receive school consequences,” Mr. Stoddard said in a written statement. “Any further actions of this sort will lead to a loss of the privilege of attending extra-curricular activities at Berkshire. Mr. Hiscox also communicated with the Athletic Director at Kirtland about our response to the situation, and the Kirtland Athletic Director was supportive of our actions.”

What the district will do to prevent this despicable behavior in the future remains to be seen, but it’s apparent the Berkshire community has a bigotry problem.

Last summer, a group of parents created a petition in response to a new LGBTQ club started at the school earlier in the 2020-2021 school year.

Full disclosure, my son is a founding member of that organization, the Berkshire GSA.

That group worked hard to put together all of the requirements necessary to be approved by the school as an official school group. Once the Is were dotted and the Ts were crossed, and a staff member was secured as the volunteer advisor, the group set up its first event.

In accordance with the National Day of Silence, the group invited all students to participate in the event designed to spread awareness regarding the effects of the bullying and harassment of lesbian, gay, bisexual, transgender, queer, and questioning students. The Day of Silence is a symbolic gesture to better understand the silencing of the LGBTQ community.

At the end of the school day, some students drove their pickup trucks outfitted with the Confederate flag in an intimidating fashion and “allegedly” fired an air-soft gun in the direction of students who participated in the Day of Silence.

A Freedom of Information request directed to the Burton Police Department in regards to that situation went unanswered.

Only a few short months later, bigoted Berkshire parents presented their petition to the school board at its June meeting.

My son spoke at that meeting.

“There is more out there than what’s in this community,” he said to the school board in defending the club’s purpose. “The exposure matters and it prepares students to be more responsible citizens.”

Sadly, it was my son that had to dispel many of the myths shared by that bigoted group of parents.

They alleged the school was trying to indoctrinate their kids and felt teachers were pushing one side of the issue while ignoring others.

One bigoted mother told me personally that she was only upset because the National Day of Prayer wasn’t equally promoted.

I asked her which student club created that event and promoted it.

She didn’t have an answer because that group doesn’t exist and no event was planned.

The GSA event was student-led and driven. The students handled both the setup and promotion of the event.

That fact escaped the collective consciousness of the bigoted parents, who collected over 200 signatures on their petition, which reads in part:

“We believe that the traditional values and integrity of our community should be upheld in our local schools. We believe that the professional school staff should be neutral and students and parents should not be aware of their teacher’s personal views on religion, politics, social or sexual ideology. We believe these values are to be formed at home with family at the center of important life conversations.”

My son also had to dispel the myth that teachers were responsible for leading this group.

“To clarify, this is not a teacher-led group, but a student-led one,” my son told the school board. “It’s about students helping other students.”

The school board took no action.

In fact, the decisive issue was barely mentioned in the meeting minutes despite the Geauga Maple Leaf depicting the discussion as “sparks flying”:

And now, high school students are following in the path of the bigoted parents in the community.

Schools should be safe places for students.

Education is the key to a brighter future for all and the opportunity to be educated and to compete in a high school sporting event shouldn’t be compromised by hate.

There is no room for hate in high school sports or in any other setting.

When my kids passed through Burton Elementary School, we were constantly reminded of the school’s motto: “Be Kind, Be Wise, Be a Friend.”

They even installed a Buddy Bench on the playground to encourage students to make new friends.

Somewhere along the way, some Berkshire students have forgotten that foundation of inclusion. They’re mimicking the hate they hear from their parents. They’re piling on when one bully sets the tone.

School districts across the nation have partnered with for-profit and non-profit organizations to curb bullying.

Maybe…ever so slightly…but there is no program or curriculum that will eradicate hate. That doesn’t mean those programs aren’t valuable, but it takes more than the proverbial lip service to impact change.

Berkshire’s school board missed an opportunity last summer to counter the bigotry that reared its head in the community. Maybe those board members will get the message now that a few students have damaged the school’s reputation.

In my years on the high school sports beat, I have heard and seen this type of behavior at many different schools. From inappropriate chants and signs to the cultural appropriation of costumes, and even physical and verbal altercations, it happens everywhere.

No school is immune from this type of behavior but some handle it better than others.

Last Friday, a similar situation occurred during a basketball game in California. On Saturday, an African-American player from Portola High School was reviewing game footage from the previous night when he overheard something he missed during live action.

What he heard were racist comments coming from a Laguna Hills student. After an investigation, which included reviewing that game footage and interviewing witnesses, the school announced it had identified and “counseled” the offending student.

“The student has been counseled, and immediate, appropriate consequences and discipline have taken place,” said a statement from the school. “Bystander students have been advised regarding their responsibility to redirect such language and report it to school administration immediately.”

But, that’s just it.

The bystanders aren’t reporting the behavior.

“Every time that I touched the ball, every time something happened with me around, you could hear them saying some sort of remarks toward me,” the player told NBC Los Angeles.

The player’s family also confirmed that racist language was used throughout the contest.

It’s time for consistency and a zero-tolerance for hate.

School administrators have to get tougher on enforcing policies from inappropriate language and actions to mask mandates and dealing with unruly spectators.

We hear constantly about the shortage of officials yet at nearly every game I attend I still see fans abusing referees. That has to stop too.

Hate of all kinds has no place in society, but especially at our schools.