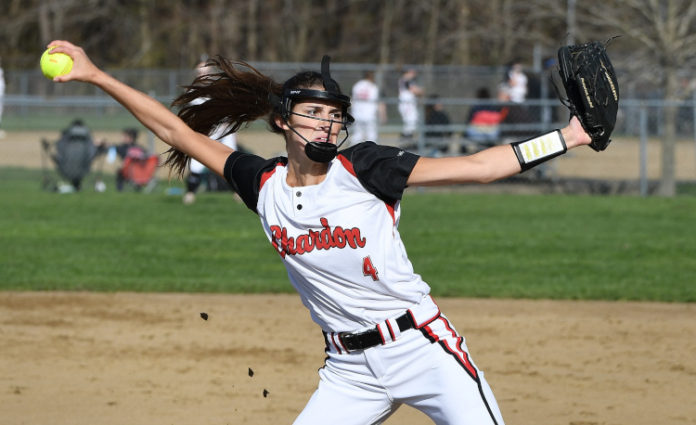 Kayla Noerr struck out eight and collected three hits, including a double and a home run, in leading Chardon past host North on Friday, 4-2.

Noerr’s third-inning homer pulled the Toppers to within 2-1 and her seventh-inning double tied the game. She then pitched out of a jam in the bottom of the inning to seal the win.

“It’s really hard to pinpoint the keys to Kayla’s success,” said Chardon coach Stewart Landies. “All I know is that she is an incredible athlete and when she has the competitive fire lit in her like she did today, there aren’t many players around who can compete with her. I’m blessed to have the opportunity to coach such a fine young lady and tremendous softball player.”

North jumped on Noerr early as Adri George led the bottom of the first with a solo home run and Olivia Augusta later singled home Jess Dodd, who had reached on a fielder’s choice, to give the Rangers a 2-0 lead.

That lead held until the third when Noerr left the yard.

The Hilltoppers threatened in the sixth when Maddie Hauser and Amy O’Brien hit back-to-back doubles but Hauser was thrown out at the plate trying to score on O’Brien’s double and Augusta struck out the next batter to end the inning.

Chardon’s bottom of the order started the seventh-inning rally.

Sidney Nagaj and Grace Legan hit back-to-back one-out singles and Noerr doubled home Nagaj with two outs to tie it. Legan scored on an error and Russo singled home Noerr to close out the scoring.

Nagaj finished with two hits for the Hilltoppers.

“Sidney Nagaj hit the ball on the screws all three times at bat tonight,” Landies said. “That young lady works as hard as anyone I know. She was in a slump. I gave the team the night off last night and where was Sid? She was in the batting cage with Coach Tosti.”

The first two Rangers reached base in the bottom of the seventh but Noerr struck out two of the next three batters to end the game.

“I’m really proud of these kids for how hard they work,” Landies said. “They never let up and fought for each other the whole way. It all starts in the offseason pushing themselves in the weight room and conditioning. This group has a real special bond. I honestly wasn’t surprised at all that they came back the way they did.”

“Our defense played pretty well today until the seventh inning and it killed us,” said North coach Taylor Braddock. “We had a few miscues today on defense and base running and, ultimately, it cost us the game. The girls just have to clean up the little things and it’s a different story.”

Augusta led the Rangers with two hits and George had the home run.

“The WRC is loaded and Chardon is right there in the mix,” Braddock said. “They have an all-around solid squad and Kayla Noerr pretty much beat us today. She pitched a great game and had their two big hits that put us down.”

Molica’s big day not enough as Rangers fall at Madison