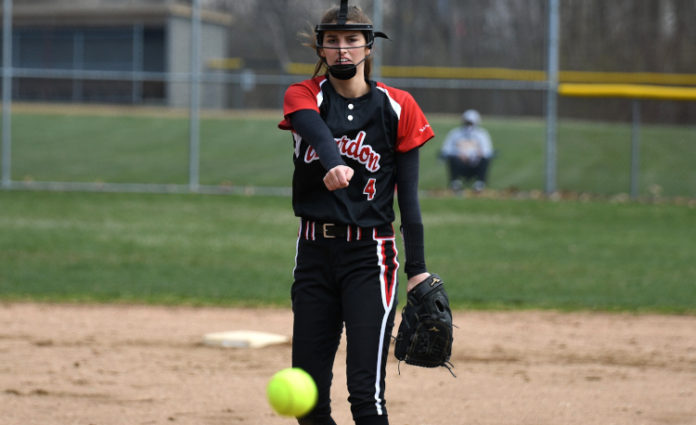 For the second time in three games, Kayla Noerr was involved in a no-hitter as Chardon beat visiting Kenston on Wednesday, 10-0.

Noerr opened the season on Saturday with three no-hit innings at Berkshire. Sydney Murray finished off that five-inning no-hitter and Noerr followed it up with five strong innings against the Bombers. She struck out 12 and walked just three batters.

“It always feels good when we have a team win,” Noerr said. “We’ve been hitting the ball really well, which allows me to be loose on the mound.”

In three games, Noerr is 3-0 with a 0.000 earned run average. She has allowed just two hits in 15 innings pitched and has fanned 34 batters.

Against the Bombers, Noerr struck out at least two batters in every inning and fanned the side twice.

“My approach today was getting ahead early in the count,” she said. “That really opens up options with different locations and pitches.”

Despite Noerr’s success in the circle, the Hilltoppers haven’t let up at the plate.

Lindsey Leggett, Madison Russo, and Sarah Sutton each had three hits for the Hilltoppers and Sidney Nagaj and Jadyn Tarantino both hit doubles, and Amy O’Brien had a triple.

“It’s very exciting helping my team to a win,” said Sutton, who is now hitting .545 on the year. “I approached the plate ready to make something happen. I was very excited for our home opener and after all the work we’ve done I was ready.”

Sutton singled home a run with two outs in the first and she singled to lead off a three-run third inning.

“It really boosts my confidence because, since this is technically my first season playing, it got all my jitters out at that plate,” Sutton said of her big game.

Chardon travels to Kenston on Friday.