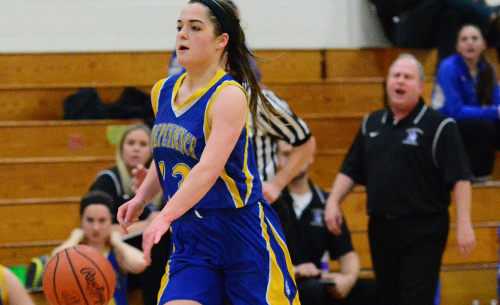 A size advantage and balanced scoring led Normandy to a 47-34 win at Independence on Saturday.

The Blue Devils, who dropped to 4-4 overall, made a run at the upset but in the end the Invaders were too big and executed down the stretch.

“Normandy is extremely solid,” said Independence coach Mike Marcinko. “They have three girls that will play college basketball somewhere and they’re huge. They start three people that are 5-11 or taller. They came into the game 6-1 and I think their only loss is to Brunswick, which is one of the ranked teams. They’re a very good shooting team.”

Normandy led just 14-12 at the half but Independence struggled to find the basket in the quarter and the Invaders pushed their lead to 28-17 at the break.

The Blue Devils played much better in the second half but never could overtake the Invaders.

“We kind of hit a drought in the second quarter, which was our own doing. We just couldn’t throw it in the ocean,” Marcinko said. “We fought back in the third and in the fourth at one point we were only down six.”

“Obviously we’re trying to trap and turn them over and try to get in the game,” Marcinko said. “Between fatigue and their good execution they got a couple of easy ones and that kind of blew it open and we subbed. All in all I thought the gals did a great job. We made some adjustments at halftime. They did a fantastic job running something new in the second half. “

With leading scorers Halle Dorko and Hallie Zumack tasked with slowing down Normandy’s towers in the paint it was Julia Riley that led the Blue Devils in scoring. She tied a career high with 12 points.

“Julia Riley played a heck of a game,” Marcinko said. “She had two 2’s, two 3’s and was 2-of-3 from the line for 12 points. We just really couldn’t get anybody else loose. Hallie Zumack and Halle Dorko were battling the big girls inside so we went to more of an oddity and ran some man offense against their zone just to move people into different positions because we couldn’t battle inside with them.”

Nicole Ferrara contributed with six points and Dorko scored five for Independence. Zumack pulled down 10 rebounds for the Blue Devils.

“Heart-wise and effort-wise it was phenomenal,” Marcinko said. “We did a great job of battling against a very good basketball team. I told them, I hate losing. I don’t give in to my own kids playing checkers let alone anything else. Walking out of the gym, nobody felt bad other than the fact we like to win games. Nobody felt bad on the effort and execution. A better team shot the ball better and that was the end result.”