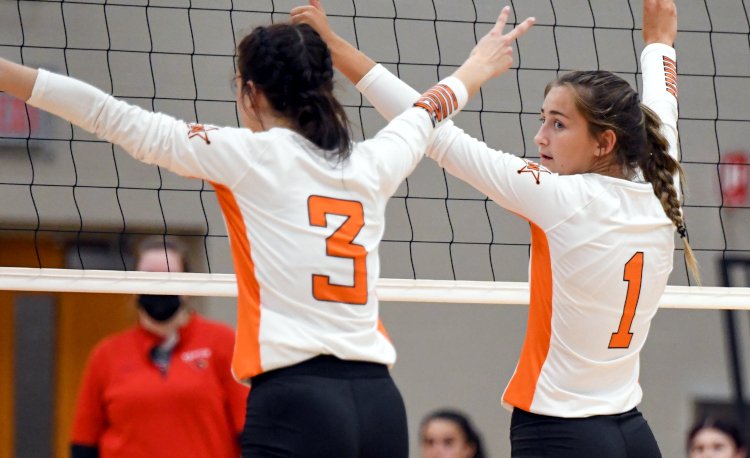 After back-to-back losses, North got back on track with a 3-0 non-conference sweep at Geneva on Monday.

“It was very important,” said North coach Tamara Heller of ending the two-match skid. “We know the goals we have set for ourselves this season and one is being as consistent as we possibly can. Right now, at the beginning of the season, we were struggling with consistency. We didn’t know what team was going to hit the floor that night. The team I know we are, the scrappy, gritty, together as one team or was it going to be the low communication, just going through the motions team. We’re not expecting to win every game but how we lose is very important to us. I think finding that consistency is slowly but surely coming along.”

North played without setter Jaiden Anderson, which provided a unique challenge as the Rangers are thin at the position.

“We had to find a way to win and we did,” Heller said. “Sam Cantrell stepped in as setter and is no taller than 5-foot-2, her hands not even crossing the net in the front row, so we adjusted our defense accordingly. It was fun to see how we handled the adversity.”

Cantrell finished the match with 27 assists to go along with 14 digs and a service ace.

“Sam Cantrell did what was best for her team in filling the role as a setter,” Heller said. “I thought she did well. She’s a hustler; she has the go-getter mentality, so it led her to not hesitate for any balls. Also, sophomore Cami Welty earned player of the game for us by hitting a .500 and earning eight kills without our real setter.”

The Rangers are back in action on Tuesday as they head to Willoughby for a rivalry match against South.

September 14, 2021
Kirtland defeated visiting Cardinal 3-1 on Monday in a battle for first place in the Chagrin Valley Conference Valley Division.

North’s Julia Kerns eager to be a Raider

Rangers roll to win at Bedford