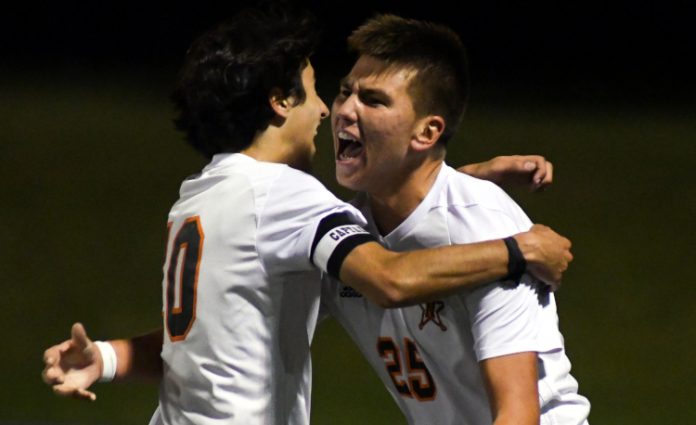 The Rangers, who now have won at least 24 conference titles in program history, can win the conference title outright with a win over Mayfield on Oct. 11 or a South loss in either of the Rebels’ final two league games.

“I played as the co-captain of the first conference championship team and then I was an assistant coach for two more and I’ve been the head coach for the last 15, so it’s pretty awesome,” said North coach Steve Misick of North clinching its 15th league title in his 34-year tenure. “Riverside was actually the better team tonight but we took care of our limited chances and our restarts were awesome. This win not only won us a share of the conference title, but it bumps us higher into the district seeding, so we’re thrilled.”

Despite maintaining possession for most of the half and firing off four or five shots for every one the Rangers took, Riverside struggled to land the equalizer until the Beavers finally found the back of the net with just 23 seconds left in the half.

“That was heartbreaking,” Misick said. “Usually, we come here and we give up the first goal, and then we have to fight our way back, but this year, we got the first goal and put a little pressure on them. They didn’t seem phased.”

The Rangers regrouped at halftime and scored a quick goal to start the second half.

Yahir Rangel, whose older brother Daniel played at Riverside, ripped a loose ball into the lower corner just 56 seconds into the second half for a 2-1 North lead.

“He’s a heady player as a freshman,” Misick said of Rangel. “We put him on their top player and asked him to defend. Their guy went back so he followed him in and he was standing in the right spot. He made a shot like that on Saturday and we could have beaten Solon but the keeper made a fingertip save right around the post. He’s going to be a fabulous player for us.”

North’s lead last 20 minutes as Antonio Turic slotted a ball across the net and into the corner for the equalizer.

Again, Riverside controlled possession throughout the second half but the Rangers made the most of their chances.

Floyd Lomis was fouled just outside the 18-yard box and Tadic lined up for the free kick with just over three minutes remaining in the game.

“There was a lot of pressure but I kept cool,” Tadic said. “I just knew what to do. I practice extra all the time. It’s like a dream come true.”

The Rangers have a week off to prepare for Mayfield on Oct. 11. They’ll close out the regular season with a non-conference game against Avon Lake on Oct. 13.

“We’ll be able to rest up physically,” Misick said. “South plays Mayfield and Kenston, so if South stumbles in any way, we’ll win it (outright). It’s been a surprising season. It’s gone well and we’ve hung with the big guys. The schedule has paid off.”