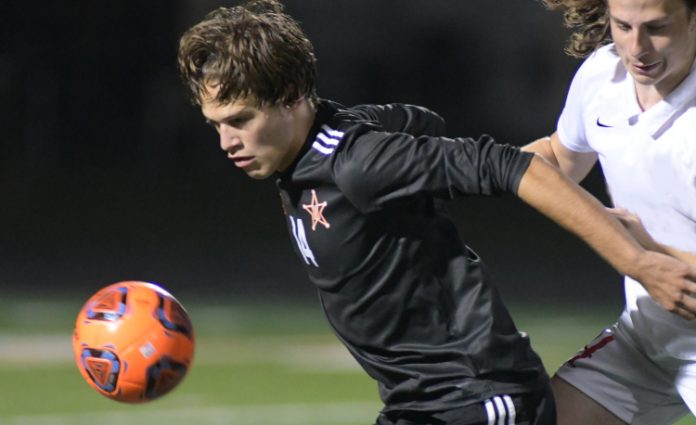 The 2021 season was filled with promise for the North Rangers, at least until injuries took their toll.

While the Rangers didn’t quite meet their own expectations, they did close out the regular season with a quality win over state-ranked Kirtland on Saturday, 2-0, and head into the postseason with a bit of momentum and a nearly healthy squad.

“It’s not like we’ve been playing poorly, we just haven’t gotten any results,” said North coach Steve Misick. “But, it’s always nice to get a win. Our first half was good; in the second half, it was all them and we just kind of hung on to win the game.”

Luka Dedic scored twice in the first half—once in the 26th minute and again in the 35th—to give the Rangers a 2-0 lead at the break.

Kirtland amped up its attack in the second half and controlled possession for most of the final 40 minutes, but the Rangers held on for their fourth shutout of the season.

“The momentum changed but we hung on,” Misick said. “It was another game where there were some basic fundamentals not being exercised by us and we’re hoping we can clean that up by the time we play again. Overall, it’s been kind of a disappointing season but a lot of things were out of our control.”

Dom Kustura and Owen Hopper each hand an assist for the Rangers, who closed out the regular season with an 8-7-2 record. Kirtland dropped to 14-2-1.

North earned the No. 15 seed in the Division I Northeast District and on Saturday will host the winner of the sectional semifinal between No. 19 Green and No. 22 Cuyahoga Falls.

“We’re going to go see the game on Wednesday,” Misick said. “The winner comes to Eastlake North on Saturday. We’re hoping for the best. There are no easy games at this point. Everybody gets a little tighter. I just hope we can clean up our problems. We’ll see, hopefully, everybody comes to play.”