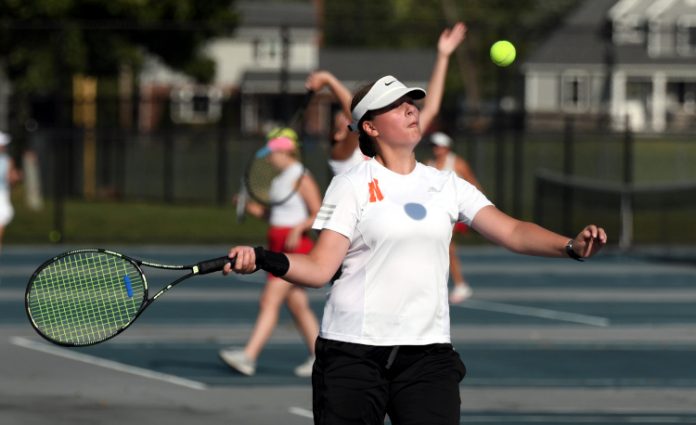 “These girls have really pushed themselves to get where they are right now,” said North coach Nick Mayer. “Were they pleased with the loss? No, but, the steps that these specific girls have taken is tremendous. They take great pride in practicing outside of practice. We are moving in the right direction and I know they are going to continue to work.”

Megan Panchula won 6-1, 6-0 at second singles and Peyton Chrzanowski teamed up with Courtney Cogan to win at second doubles, 6-4, 7-5.

“Megan is one of those players who wants to learn all the time,” Mayer said. “She wants to be able to understand the game at different levels. She’s had a lot of close matches and this match, she really put everything together. A key for her is her feet. If she keeps her feet moving everything else follows.”

“Peyton and Courtney played a complete match,” Mayer said. “Coming off a lackluster performance, they were motivated to get back out there. The match was competitive but the girls never got too high or too low. The big thing for them is getting more experience playing and being doubles partners. It has taken some time but their hard work as individuals and teammates paid off.”

“Our third singles and first doubles both won their first set and lost the second, ultimately falling short in third-set tiebreakers,” Mayer said. “It’s tough because matches like that you really need a few shots to go your way. Gabby was moving her opponent all over the court the first set. Kayla and Ashley were hitting their marks with great angles. They got away from those things that were working when it came to the second set. Then, when it comes to a tiebreaker you got to push the pressure aside. It was a great experience for our team and hopefully, we learn from this and we get to celebrate at the end of the match.”

Despite the setback, Mayer is confident the Rangers have brighter days ahead of them as they build the program and gain experience.

“Our goal is to make sure we are getting better every day,” he said. “We have conversations as a team about making sure we are better today than we were yesterday. They are taking that and the work is getting put in. North tennis is on the rise and our captains Grace Forwick, Megan Panchula, and Gabby Cannato are leading the charge.”

Rangers dominate second half in win over Eagles